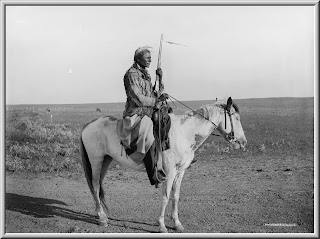 ASSINABOINE INDIAN 1895
Georgette called last night excited about how well Remington is doing.  I think we were there Friday & set up the squeeze so she could get a halter on him.  Sunday she put a halter on him out in the 1/4 acre pen, didn't even have to have him in the round pen.  So he's done with the squeeze, unless he decides to regress, which I don't think he will do.  He's a good boy & wants to please, but had gotten away with being evasive.  Next big step will be lead rope.  She is going to try to get him to walk with her first.  If he learns to do that, a lead rope should be easy.
Heard from Lynne today.  She had been Honcho & Remington's mom since last August, but had given Remington up because he was getting too aggressive with Honcho & wouldn't leave his fly mask on.  She is going to have to go stay with her Mom in the SE for a few months, so Honcho will be coming back here.  I don't know yet if she wants to just have him visit or sign a release & let him go to a new home.  We'll have to pick him up tomorrow, John leaves for Indiana Thursday.  Sure wish it would cool off while he's gone, but I don't think it will.  Honcho's a good boy, although he has one of those steel trap type of minds, & loves people.  That's an interesting combination, that's a lot of fun.
We encountered our first rattlesnake of the season.  John came down from the hay barn & said he thought there was a rattlesnake in there but he couldn't tell where.  I could hear it rattling before I got to the building.  I don't think I've ever heard a crankier snake, he was rattling when John got there, John left, came, got me, was rattling when we got back & continued to rattle while we tried to figure out exactly where he was.  John can't hear & I can't see, so we make a good combination to get in trouble.  I finally figured out where he was, behind the hay of course.  John leaned around & could see him in the S-shape strike position & rattling as loud as he could.  We got the snake catcher & box & John had to catch him 4 times before he stayed caught & the lid was closed on the box.  He never stopped rattling, & was in the S-position in the box.  Hobo the feral cat was in the neighborhood, so we figure she must have riled him up & we kept him riled after that.  We don't really want one in the hay barn especially one that is as cranky as this one seemed to be.  A nice gopher snake or racer would be great, but not a rattler.
Posted by Tish at 5:25 PM