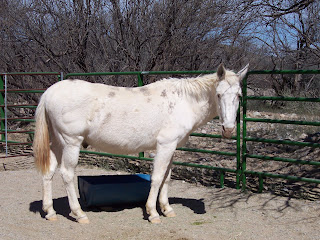 Boy are we in the doghouse as far as Rusty the mule is concerned.  It seems in the flurry of getting chores done & getting ready to go to town, we forgot to let Rusty out of his pen this morning.  When we came home at feeding time this afternoon we were greeted by one pissed off mule still in his pen.  He had worked himself into a sweat & when we got out of the van he was screaming like a howler monkey, as he paced back & forth.

John let him out & he immediately rolled in the dirt, to dry up all the sweat I would imagine, since it was starting to get chilly.  I came bearing gifts of Mrs. ?????  Pasture Cookies, which they don't usually get except on special occasions.  He was willing to take both of them, & look for more.  We left him out while John rounded up the others, & I fixed their beet pulp & supplements.  He was willing to go into his pen when the time came, but really worried about the gate being shut.  In fact he almost wouldn't eat, he'd rather keep checking the gate.  I hope going out like normal at bedtime will settle him down.  Mules do have their own way of looking at life & it sometimes doesn't make a whole lot of sense to us mere mortals.

When we first got Jack the other mule years ago, we kept him in his pen for the first week or so.  He spent every minute pacing back & forth along the corral panel, until he had a path worn into the dirt about 10 inches deep.  We thought he was maybe missing a special buddy, but once we let him out of the pen, he was just fine.  Must be a mule thing.