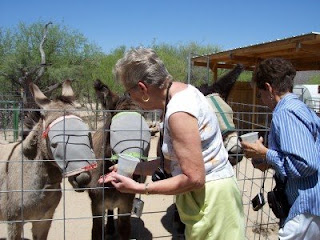 Actually this was some long time friends that came to visit us, not the donkeys. But of course the donkeys thought they came JUST to see them.

I didn't have a virus, my server was upgrading & making it better. Unfortunately it took about 3 or 4 days for them to get it running smoothly. In the meantime I was about ready to reformat & start all over, which I really didn't want to do.

Yesterday morning John came in & ask me if I heard the herd running. About a dozen of them came over from Burroland at a run..........well the minis were running flat out trying not to get run over. And Jenny was trotting, & keeping up quite nicely. They did a couple of circles around the 10 acres, & stopped out by the feed room. Chester was right in the middle of it, & John said someone got too close to him, & he kicked up his heels. That means he was putting all his weight on that bad elbow. He is still lame although you have to look closely to make sure he's limping, most of the time. But it doesn't seem to cause him pain, & he hasn't favored it for quite awhile. I hope this means we might be able to beat the infection long term.

Jack seems to be doing just fine. The Vet said 7-10 days, we'll probably take the bandage off Friday. I hope he cooperates, he can really be a challenge if he doesn't want to do whatever it is you want him to do. The Vet said he behaved himself when she was sewing him up, so hopefully he will appreciate our help in taking the bandage off.
Posted by Tish at 4:38 PM