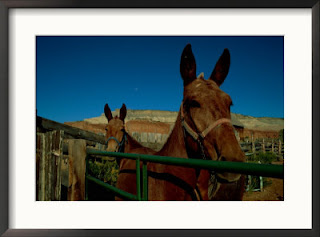 We're having a lot of fun with the fly masks. Chili managed to keep his on all day today, which was a first. Rusty & Gus both come in every night without their masks. The first day we put masks on, they started jerking each other around by the mask. I yelled at them, but obviously they didn't listen. Rusty is 29 years old, he should know better....!!! He also has allergies & pink skin around his eyes, so by the time we find him his eyes are goopy. He also walks right up to me, & sticks his face in mine like, "Do you see my eyes? They aren't covered............fix it........!!!

When John went into Jack the mule's pen to give him his mush, he asked if I had seen all the blood in there. We checked all the body orifices.......nothing. I happened to glance down at his right rear foot & there was blood dripping off the back of it, from about 8 inches up the inside of his leg. If someone asked me which one I would rather not have to doctor, Jack's name is at the top of the list. He can be very opinionated if you do something he doesn't want done. We built one of our corral panel squeeze chutes, he led right in. He was a little jumpy about the nozzle spraying water on the leg, but stood pretty still, for him. In the process we found another cut about an inch or so long running across underneath the back of his fetlock. It was getting dark, so I just rinsed it off tonight & "puffed" some Vet Powder on it, to help stop the bleeding.

CAUSE? When he went in his pen tonight, he laid down & rolled in the corner where his feed bucket is. We put one of those plastic carpets that people put under their office chairs, under his feed bucket, because he is a sloppy eater, & it helps to keep him from picking up too much dirt when he cleans up the stuff he drops. It's heavy plastic & unfortunately has sun rotted & started to splinter. I've been meaning to replace it, but haven't gotten to an office supply store to get one. We found blood on a spot that was particularly jagged. I feel bad enough when they hurt themselves or each other. But I knew this needed to be replaced, & just didn't get around to it, so he has to suffer. Talk about feeling like a bad Mom........!!!! I'll check it tonight when we let everyone out, & hopefully in the light of day, will be able to evaluate a little better.
Posted by Tish at 8:19 PM