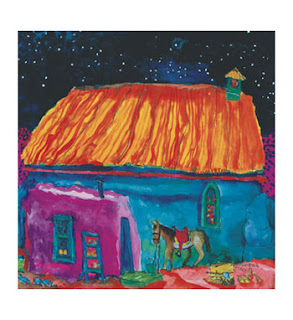 We have some that cooperate, we have some that don't, & then we have the unknown, ones that have come in since last shots. And then there is Jack the mule. We no longer try to give him shots at all, he will try to kill you if you do. I figure at age 26, & as tough an old bird as he is, we'll worry about treating him if he does get something.

Almost everyone is rather resigned to getting the shot that makes the cookie appear afterwards. Buddy has always been suspicious & we try to catch him first. Doesn't always work, & today was no exception, but he saw the others get caught, made over & a cookie, so he finally allowed himself to be caught. Next was the 3 minis, they are ALWAYS a challenge. I got a halter on Justin, almost had it latched & he took off with me bouncing behind, at least for a little while. Actually Lynn & Cheyenne were both pretty good today. Of course we REALLY made over them during the process, with Justin watching intently. He decided we weren't going to eat him, & cooperated.

Jenny wasn't a problem, then we came to the BAD BOYS, Chili & Gus. The thought never occurred to me that Chili isn't halter broke. Not only is he not halter broke, he doesn't want that thing close to him. We had to make up a chute to squeeze him in using corral panels. When we let him out he pouted, wouldn't let us close to him, which is very unusual for him. Usually he's right in your face. He has the type of personality that takes to clicker training real quick, so if I can get the time, we'll work on some halter wearing & leading. Gus was no problem, he has had some good training at sometime in his life. John was laying over his back the other day, & he could care less, so he's probably been ridden. He's certainly big enough, he's almost as big as Jenny the mammoth.

Didn't give Chester shots, he's on antibiotics & don't want to confuse his body anymore than we have to. He's actually walking pretty good again. He seems to cycle thru times of being fairly good & then going downhill. I get discouraged when he isn't good, but he's never shown any inclination to give up. I think the times he's regressed, is when he was on Baytril, rather than Naxcel. So I'm going to keep him on Naxcel for the forseeable future. Keep him in your thoughts.
Posted by Tish at 11:47 AM