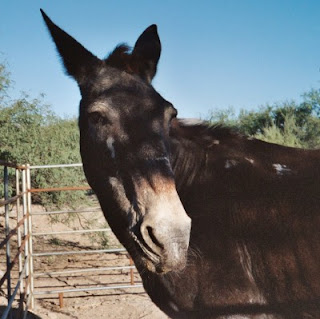 This morning when we went out to feed, Jack's leg looked good, no swelling, no limping...............BUT, it was still dripping blood. I called for a vet appointment, & they said we would have to bring him in & leave him, they had emergencies all over the place. So we loaded him up, & hauled him in. Put him in a little holding pen to wait his turn, & when we left he was happily rolling in real dirt. I would imagine by now he has rolled as much as he wants, & has figured out Max isn't anywhere to be seen. So he may be telling them about it.

We just picked Jack up. He has a big blue bandage from coronet to hock & it has to stay on for 7-10 days. That means corral time, which isn't going to go over very well. He managed to stab the vein dead center. Nancy said when they cleaned the dried blood off, instead of dripping it started spewing in an arch. She said 1/64 of an inch either way, & he probably would have missed the vein. He doesn't like that "thing" on his leg & keeps shaking it like a cat does when you put scotch tape on their foot.........!!!!! (G) Hopefully the 3 stitches she put in will keep it from bleeding anymore. Otherwise we'll have to take him back & they will have to do surgery.

If you haven't checked out our web-site lately, please do. There's been some changes made, & we will be updating on a regular basis.
Posted by Tish at 2:11 PM