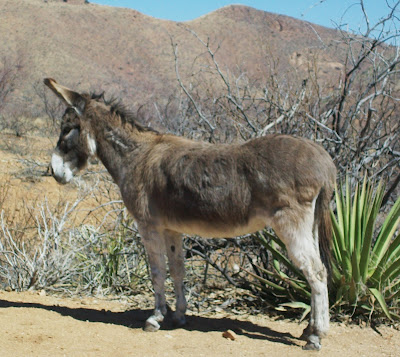 This is Eloise looking over her new home yesterday.  It wasn't easy to get her to hold still long enough to get a picture.  She hit the ground almost running, trying to see everything at once.

We had her on a lead & almost had a wreck with Tio.  He got so excited when he saw her he started acting like a silly little boy.  Laura said he's usually pretty mellow, but he was bound & determined to see her up close.  She pretty much ignored him, but I didn't, since I was the one doing the leading.  The idea of getting caught in the middle of an excited little boy & a girl that was trying to ignore him, & see all the new stuff, really didn't appeal to me at all.  John & Laura were trying to catch up, all in all it was probably one of those "video" moments, but we were all too busy...!!!!  We stuck Tio in a pen, much to his disgust & gave Eloise a chance to investigate.  Laura said after we left she let him out & he behaved himself.

Jackie has a sore foot, so he just watched for the most part thank goodness, don't think I would have enjoyed trying to foist off another one.

Today we took little Cheyenne to the local vet clinic.  Her teeth were just floated in February, & already are starting to wear funny again.  Dr. Voss up at Gilbert said she might have some TMJ.  Dr. Megan said she also might have some arthritis in the jaw joint, not a whole lot can be done for either one.   So we will continue to feed her mush & feed her by herself, so she doesn't have to compete with the other minis.  She also probably is not emptying her bladder completely, & ends up dribbling.  Not much to be done for that either, Dr. Megan would also like a urine sample like Dr. Voss asked for.  Probably not going to happen until, pigs fly......!!!!  I have seen her pee once since we brought her home from Gilbert in February, & there was no way to "save" any of it.  John said we could put her in the garage & wait for her to pee on the floor & suck it up in a syringe.  No telling how long that would take, she'd have to get comfortable in the garage, she's never been inside that I know of.  Then she'd have to be comfortable peeing on a concrete floor, that is going to splash on her legs.  All in all I don't think so.......!!!
Posted by Tish at 4:13 PM