Today has been "interesting", so far.  It was 9 degrees this morning, so I guess you could say, we are having a warming trend....!!!  Unfortunately the water buckets didn't reflect this "heat" wave & were iced over with ice thick enough John had a hard time breaking it with his trusty "ice breaker".

We needed to have Buddy Brat to the vet to have a little probable sarcoid taken off his sheath, by 10:30, so there wasn't a lot of time for John to play with ice.  He made sure Ruthie & the little mules had water & figured the others could get a drink from the 2 heated tanks when they went out after breakfast.

Rusty is almost back to normal, so he didn't have to go see the vet.  He still needed to take some Tucoprim this morning & rather than relax & enjoy it (mixed with applesauce) he tried to throw a mule fit.  Caught John flat footed, & we almost had a train wreck.  One thing about Rusty, when he misbehaves, if you get in his face, he will usually give up gracefully.  So I got in his face, & he decided it wasn't worth the tantrum, except for a little head pulling away.  A couple of jerks on his gums with my thumb & he decided the head pulling wasn't working out so well either, so we managed to get done what needed to be done.  Wish I was bigger or he was littler.  (G)  Can't wait for tomorrow morning for the continuing saga........!!!

Buddy hopped in the trailer & off we went.  Got to the vet, she checked him over & brought out this oversized ball point pen thingie.  I've had things burnt off with liquid nitrogen before, with a thermos & cue tip I think, it's been awhile.  This little thing has a 1 use cartridge of liquid nitrogen in the handle, with a tip that can change size depending on the size of whatever you are freezing.  His little growth wasn't very big, so it didn't take much, which was great.

While we were there I had her check a little tumor below one of his eyes, that had developed over the last year.  About the size of a pea, seemed loose, like it might be encapsulated, not attached to anything.  Everyone thought it would be a good idea to take it out, since he was already there.  Dr. Megan thought it might be a thorn or something rather than a "real" tumor.

She cut thru on the bottom & a big mushy thorn materialized.  Pulled it out & there was still something there.  She started pulling on it & this wad of "hair" came out.  As she cleaned it up & sutured it the vet tech cleaned up the wad. 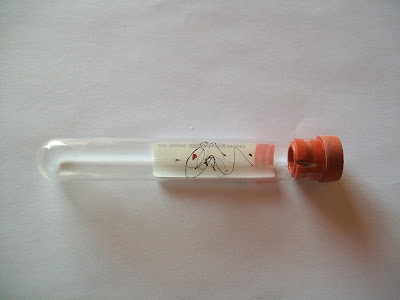 This is the "hair", when the tech stretched it out it was about 10 inches long.  The general consensus is, it's an eye lash that went crazy & continued to grow even though there was no place for it to go.  I guess it got trapped in the wound made by the thorn someway.  Whoever heard of a 10 inch long eyelash............????

There have been larvae in the Rubbermaid water tank & we all had been wondering what they were.  There are some water bugs of some type, look like Daphnia, but who knows, thought it might be some of their "children".  Yesterday John found quite a few mosquito dead in the water.  Not a good time of year to be hatching out & going thru your life cycle if you are a mosquito.  The water was warm, but once they become adult mosquito, it looks like they didn't even make it out of the water.  Too bad.........!!!!!

When we came home from the vet, all the jennies were running like crazy west of the pens.  When we left this morning Lysa hadn't got here yet to clean the pens.  I guess she left one of the gates open, because Ruthie & Aaron were out in "public".  The jennies weren't trying to hurt him or anything, but Ruthie was really trying to protect him, & everyone was acting like idiots.  John got a treat & Ruthie was more than willing to follow him back to the pens, & of course the mean "wittle" kid trotted along with her.

He will be 3 weeks old tomorrow, I had said we'd let him out at 4 weeks, but might go ahead & let him out when we are here to make sure there are no problems.  We'll be letting the mini mules out soon too.  Probably won't let everyone out at the same time for the first time, that might get a little exciting.....!!!
Posted by Tish at 4:03 PM