Yesterday a friend was here & we were going in the feed room to get something. Nicky was so thrilled to see someone he wiggled out of the door. In the process of getting him back in Anubis also got out & took off like a greyhound, well at least half a greyhound. Nicky went back in pretty easy, but in the meantime little mini Pepsi was following the half a greyhound as she tried to check out the whole area around the pens. He kept her moving as a pretty good pace & he finally got close enough to her, she decided that she REALLY wanted to go back into the feed room. I think if he could have caught her he was going to do her bodily harm, even though she isn't that much smaller than he is. Perhaps all the threatening the dogs do thru the fence, isn't such a good idea after all........!!! (G)

This morning when John was doing the round-up it was Quilla's turn to go into his pen. You could almost see the wheels turning as he decided he didn't really want to go in there. He turned & trotted off, which was a shock........!!!! We were told he was crippled when he got here, & we hadn't seen him move any faster than a sedate walk & at times if he stepped on a rock he would limp. This was a bonafide trot, so I guess he's feeling pretty good. It took both of us to get him corralled enough to go in the pen. Actually it took me growling at him in my "I"m in charge" voice more than us chasing him around, because quite frankly he was winning that battle.

This afternoon we moved Honcho & Remington from their old homes to their new one. Remy isn't really into halters & leading & all of that nonsense. When we got there, they were in a small pen & between gates & corral panels we got them in such a small area behind the trailer they really didn't have much choice. I shook the a pig paddle, which sounds like a rattlesnake behind them, popped Remy on the butt with the paddle, & he hopped in. Before we got Honcho in Remy came out again, but by that time there was very little room left behind the trailer, the back gate was almost closed. So with a little shooing & arm flapping, they gave up & went in the trailer. 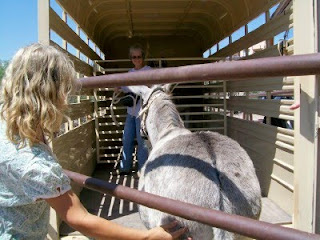 Jacquie trying to goose Honcho, which didn't bother him at all......!!!
The trip to their new home was uneventful except for Remy rubbing his butt raw on the front of the trailer. Many of the donkeys that don't like to be in a trailer, will brace themselves against the front of the trailer so hard, they rub all the hair off. If it is a long trip they will rub it bloody. This was a short trip, so he just rubbed the hair off . Lynne their new Mom managed to slap some Swat on it before they came out of the trailer. 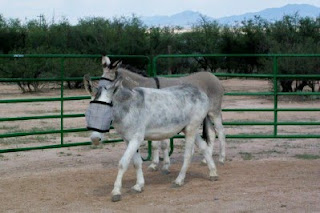 This is the boys in the round pen at their new home. After a few minutes of looking it over, the gate was opened & they were checking out a big field when we left. This will be a good long term home for these boys, & they will keep Lynne busy trying to keep ahead of them.
Posted by Tish at 11:18 AM