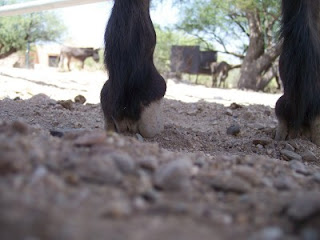 This morning I tried to take a picture of Shag's feet after his trim. He was standing in loose gravel & the picture didn't turn out very good. They really do look a lot better. This afternoon I went out to try again. Walked the 10 acres, (no Burroland during the day, in fly mask season) checked out all their favorite spots to stand in the afternoon when it's hot. Found everyone, except Pepsi, Shag & Rusty the white mule. For some reason he is absolutely smitten with Shag. Maybe he's been with a mini horse before, or maybe he's just never seen one that small. Whatever it is, they seem to be a pair. I'm assuming Pepsi is with them. Rusty is usually right by Max the horse, but it looks like he might have a new best friend. I'll try to get one when they, hopefully, come in for supper.

Doctored Pepsi's sarcoid again last night. He really is determined not to get doctored. Between John trying to hold him still, while tied to the corral panel & me trying to get the xxTerra on the sarcoid, without getting it in his eye, it's quite a battle. He's definately stronger than either of us. We finally got him to stand still just long enough for me to get it on him & even managed to rub it in. Told him what a good boy he was, (really didn't mean it) gave him an animal cracker, which he took like he deserved it, released him & he promptly rubbed it off on his front leg................!!!! I know they don't do things on purpose to really irritate us, but they certainly do.......!!!! (G)

We figured after the battle he would hold a grudge & not want anything to do with us. Didn't seem to bother him at all, he still expected pets & a carrot when John let everyone else out. This morning when I was trying to take pictures of Shag's feet, I was leaned over & Pepsi came up & laid his head on my back. Next thing I know he is licking sweat off my arm. So he seems to think we're great friends............until it's time to doctor...........!!!
Posted by Tish at 1:16 PM