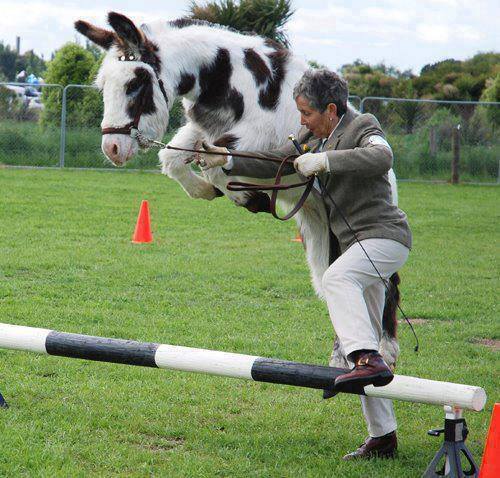 Today has been a dreary misty day, rather unusual for this time of year.  I doubt that we got a tenth of an inch of rain, but at least it hasn't been sunny and hot, so I guess I shouldn't complain.

Peppers sleazy pjs came today, but I can't see if they fit since he is wet.   Maybe tomorrow will be a little drier, certainly hope so, I'm suppose to race tomorrow night for the first time in almost 2 months.  I'm anxious to try out my power steering.  I've had the car out on our dirt road up to speed and it feels pretty good, but won't know for sure, until I'm on the track.

A woman that has mini horses and drives them is coming out Sunday to see if she would like to add Molly and Jack to her family.  She shows the horses, I think it would be fun to show the mules.  They really have settled down since they've been here, and I think they would make a cute little team.  Actually she turned a yearling molly mule over to us about 6 years ago.  Anita had bought her at auction and found out a few days later that she had infected openings in her belly.  The vet said put her down, but Anita said no.  They did meatball surgery, rigged up a thing on their pick-up so they could get her off the ground and walk her around.  It was over 2 weeks before Molly could actually stand on her own and quite awhile before she healed.  Once she healed she was hell on wheels and Anita was afraid she would hurt her little horses.  Molly was Miss Personality and we found her a wonderful home with a group of people that had a organic farm.   So Anita has some idea of what mules are like, which is a good thing. 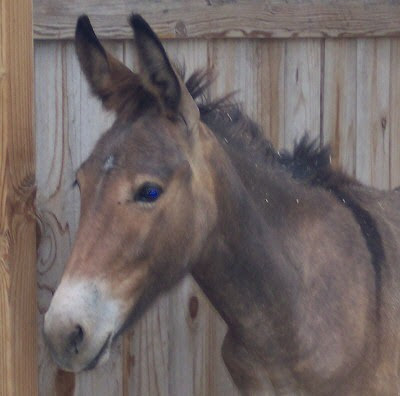 Our skin problems are winding down finally.  Everyone seems to be doing pretty good.  Pepper's rubbed places on his shoulder and hip are healing.  I think I actually see a little hair fuzz growing in, so hopefully he's going to have some hair grow back.  He's going thru another "thin" time and looks like a walking skeleton.  I hope no one turns us in for abuse......!!! LOL  He eats good, but it just doesn't turn into fat, muscle or even just flesh I guess.

Haven't heard anything good or bad from Karla about the 3 "happy wanderers", so I assume they are staying where they belong.

I've never seen a "pinto" donkey before. What is the story behind the coloring???

In donkeys they are just "spotted". Not a lot of them, but they can certainly be eye catching when you see one. I have a white one that has greyish/blackish blots here and there, not really spotted. He just looks like he's dirty.

Pepper's probably not skinny - it's just that the others are all so plump he looks thin in comparison : )

Could try adding some whey protein isolate to his mash, maybe a little oil (I'm liking the Mediterranean Blend I got at Costco, maybe with some Hemp Oil from Swanson).

The problem with the old buzzard is he goes thru times when he won't eat almost anything. Then we have to start going thru different things to whet his appetite. I've tried the whey and he'll eat it, but for some reason it isn't a big hit. It smells wonderful, don't know what the problem is. Have to work around him being Cushings too. Right now he's gobbling up Nutrena dry Senior feed. I got a buy one get one free coupon, tried it, & he thinks it's great, has even put on a few pounds I think. That's not to say when we feed tonight, he'll turn up his nose & use that head as a battering ram.