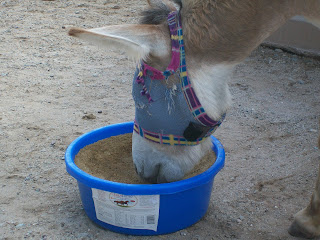 When Kathy was showing us around Longhopes, I noticed each pen had one of these pans in it.  Being the nosy person I am, I had to ask.

This is a product called Equilix, it's not a salt lick, nor does it have any molasses in it.  It's more of a lick supplement, with probiotics, enzymes, & all sorts of "stuff" in it.  I'm usually a little hesitant about jumping on the bandwagon with the latest "best thing since sliced bread".

Kathy has used it for quite sometime, orders it by the pallet & really thinks it makes a difference in the health of her guys.  Sounded worth a try & a local feed store has it, so off Georgette & I went to fill the trunk of the car with pans.  Actually we figured out 3 would allow enough room for us to still have room for our suitcases & other stuff we brought on the trip.

Brought it home, set it on the feed room porch to protect it from rain, & almost had to stand back to keep from getting ran over.

Right before I took this picture of Frijolita enjoying a few licks, there was 3 heads buried in the pan going after it.  Unfortunately Daisy decided that she should be able to "snack" alone & ran everyone else off, by threatening with her rear feet.

It seems like there is someone having a lick or two all day long, they really like it.  There is nothing in the ingredients that sounds high sugar.  At the rate they are going, it isn't going to last out the week............!!!!!

Yesterday we took Jenny up to the clinic in Gilbert as planned to have her resectioned foot re-evaluated.

Got up there & boy was she ready to get out of the trailer.  Maybe she enjoyed her "almost" month long stay up there more than I thought.  There was 5 "new" vets there, they spend their summers before their last year of school, going from Vet clinic to Vet clinic for 3-4 weeks to learn from established clinics.  I asked if any of them had been there when Jenny was there for surgery.  They said no, but they had heard about her.  Then one of the techs came out & told me how much time she spent with Jenny.  I knew they were turning her from side to side every couple of hours, but didn't know she was getting fresh water every hour or being groomed everyday & all the other "make Jenny comfortable" stuff they did........!!!  Jeesh, no wonder every day when I called & talked to Dr. Voss & asked him if she had given up, he would say "No, she seems very happy & satisfied".  I guess she was quite the primadonna.

When her foot was unwrapped, Dr. Voss immediately saw the area Courtney was worried about.  While they were all looking & discussing what would be the best plan of attack, Courtney came in.  She & Dr. Voss talked way over my head,,but I did understand what they wanted to do.  Basically she is walking on the sides of the foot, which is what Dr. Voss wanted.  But because of the push up pressure when she steps, it is shifting the lower part of the hoof wall, into the upper part.  So the plan was to cut a channel in the hoof between the upper & lower part, & to also trim the edge of the hoof, so it isn't touching the ground.  This is what Courtney had said should be done last week, but she wanted a Vet to make the decision.  So they cut a groove between the two sections, shortened the hoof wall on the side & said we don't need to do all the heavy bandaging anymore.  Yippee!  It will still have to be covered with gauze to keep the open areas from getting packed with mud or picking up gravel, but Dr. Voss thinks being out in the air will be more healthy than keeping it completely wrapped.

She seems to be walking good today, so I would imagine it feels a lot better.  We'll still be bandaging every 5 days or so, but it should be a lot easier & quicker, not to mention maybe the Hoof Wraps will stay on better without the diaper & all the other wrappings we were using.

Tomorrow morning we are having a garage sale at Mother's house to get rid of all her stuff.  Thank goodness she isn't sentimental, I can't imagine if someone was getting rid of most of my "stuff", but to her it's just stuff.  I'm not a garage type person, getting ready for it has been a little overwhelming.  John is really good to help, & Georgette & her husband Dave came out a couple of days ago, & spent the whole day, organizing & marking stuff.  I tried to get everyone interested in maybe having a fire, but they all seemed to think that was a little radical.........!!! LOL
Posted by Tish at 9:26 PM

I looked at the website & couldn't find a guaranteed analysis on the Equilix...did on the Equipride. Is it the same? Emailing you privately on it.