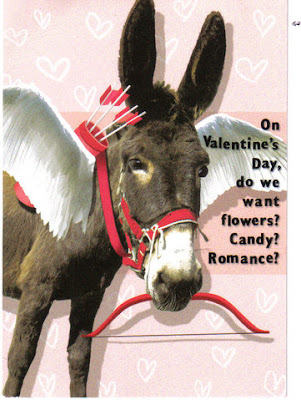 HAPPY VALENTINE'S DAY
Yesterday Buster came in with a poked eye, & this morning Noelle was almost 3 legged lame on her left front.  Although she has become a little more friendly, we still aren't in her circle of friends.  So I put a halter on her & John was going to hold her while I checked out her shoulder to foot to see what I could find.
We found out she has probably never had her foot lifted (she's 24 years old, no wonder her feet need attention)  & might not have ever had someone poking & prodding her leg either.  It only took a second to figure out she needed to be tied, & even then saying she was uncooperative is an understatement.  Every time I'd touch her shoulder or head down her leg towards the foot, you would have thought I was using a cattle prod, she really wasn't interested in being examined at all.
I don't think it's the foot, so hopefully it isn't an abscess.  I thought she reacted when I squeezed at her "elbow" but John said it wasn't much more reaction than anywhere else, so maybe not.  I didn't find any swelling or heat, so we gave up & let her go.  John said "we need to desensitize her".  That means, Tish needs to desensitize her......John isn't really into training.
Haven't heard from the horse's Mom, so I guess I'll give her a call & see if she'll be ready to move them by the middle of the week, like she said.  John & I are both fighting the coughing crud & it certainly would be nice if we had 6 less animals to take care of & clean up after.
Posted by Tish at 12:53 PM