Well it was an interesting day.  We met up with others that were going to help, we had 5 trailers in all & headed for the place.  Got there & were greeted by: 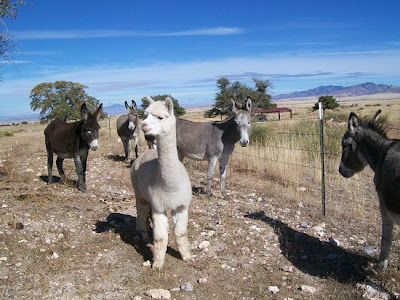 Hmmmm..........we thought everyone was going to be in corrals.  So we drove in & there were horses & donkeys running around on a large acreage, maybe 40-80 acres.  They were not the least bit interested in all these people.  But they were 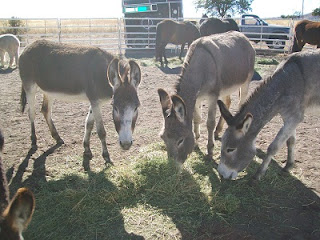 interested in treats.  I was real proud of the donkeys, they went in the corral pretty easy,  a quick shake of the pig paddle (sounds like a rattlesnake) & they popped in the trailer.
The man would not release the jack or a very pregnant jenny.  They both were friendly & probably would have hopped in the trailer if given the chance.
Some were trailered before the donkeys, but of course the more difficult ones were not going to go without a fight. 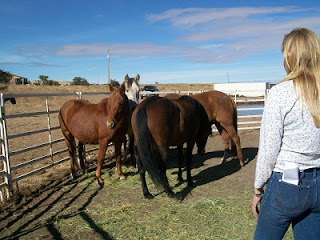 And fight was exactly what one of these horses was ready for.  She is a kicker, & it's not fear kicking it's, "you come one inch closer & see what happens" kicking. 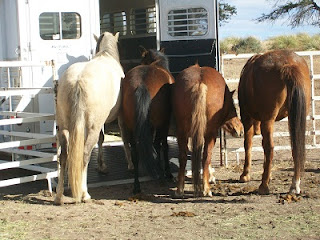 Someone said let's get her out of the "herd", so we let her out of the corral & the other 3 went right in with a little coaching.
Of course there is always one in every crowd that refuses to go along with the program, that is her below, watching from a distance.  She is a pretty black mare, with a lot of speed & attitude. 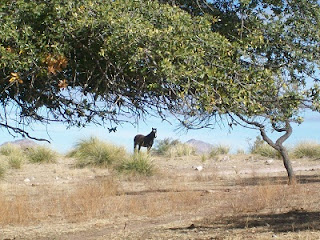 When we left with 9 horses & 4 jennies, guess who was watching us? 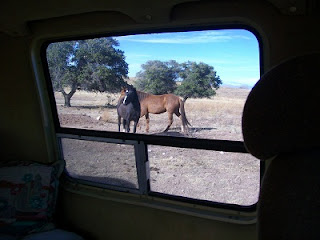 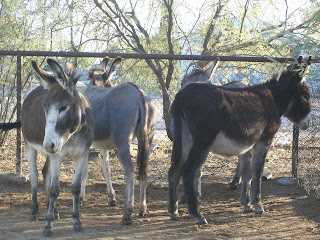 This is the girls in their new pen, north of Tucson.  Mark Myers from Peaceful Valley is going to pick them up in January.  The people at Hoofprints on the Heart Rescue, almost doubled their "guests", in one day, so I'm sure they will be glad when he comes & gets the girls.  They have been running with the jack, so I would imagine they are all pregnant.  A couple of the mares are about ready to drop little mule babies.  One of them is a pinto, it will be exciting to see what her baby looks like.
I guess the owner is having 2nd thoughts about keeping the jack, he has become mean & aggressive overnight.  I was afraid this might happen, his girls have disappeared & he wants them back & will do whatever he can think of to make it happen.  There is a back-up plan if the owner decides to release the jack.  I hope he makes up his mind before someone gets hurt.
Posted by Tish at 1:11 PM

Y'all would be real proud to see them donkey wranglers, Tish & John. They did a mighty fine job haulin' asses.

Thanks for the kind words.....I think.......LOL At least I showed I could still get up off the ground, when the one jenny gave me a shoulder shot.