Today was round-up day for the black mare & the sorrel kicker.  This morning before we left we let everyone out as usual.  I looked in Jack's pen, which had quite a bit of hay left in it & this is what I saw: 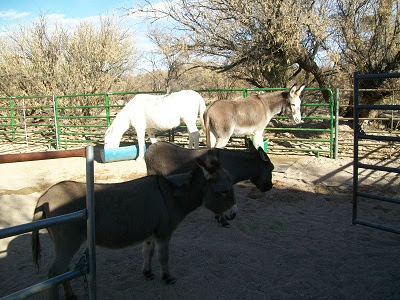 Rusty the mule, Frijolita, Lynn & her "friend" Pepsi.  As you can see only one of them is eating.  Rusty got there first & was hogging the leftovers. 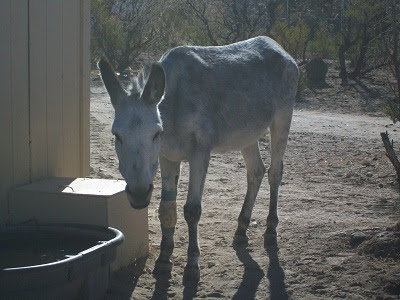 This is Chubby Pepper, getting a drink from the one water tank that has a heater in it.  He probably doesn't look too "chubby" to most people, but compared to last year he looks pretty good.  I haven't had to put a blanket on him yet this year, which means he gets to go out every night with the "herd".  He doesn't care about the herd per se, but he does like his ladies, Jenny in particular.  He's even walking pretty good on his cracked hip, & blown out knee.  I have kept a wrap on his knee 24/7.  I don't know if it is making the difference, but he isn't limping much at all, so I'm afraid to take it off............!!!  (G)
We met the people from the rescue & headed out to do battle.  The man wasn't there although he knew we were coming, & had signed paperwork for these 2 Saturday.  The horses weren't in the corral again, in fact they weren't even in sight.  So James & Deana took off cross country in their pick-up to find them.  Didn't take long, as soon as the horses saw the pick-up they started following it.  In the meantime, John & I were entertaining the dogs, the alpaca & the jack that had gotten ''aggressive".  He didn't misbehave the whole time we were there. 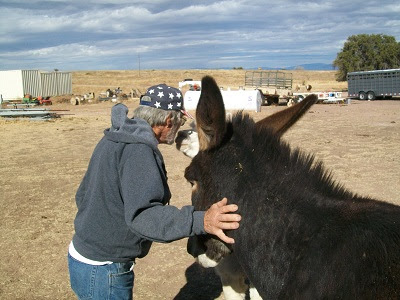 This is John sharing breath with the alpaca & petting the jack, while we waited.  Once the horses got to the corral, it didn't take very long to get them in the trailer.  The black mare was more than happy to go in & eat hay.  The sorrel was a little less intrigued with the idea, but finally went in.  I guess there were too many people & trailers Saturday, because today they weren't bad at all.
After they were loaded Deana & I went up by the house to visit with the bottle babies. 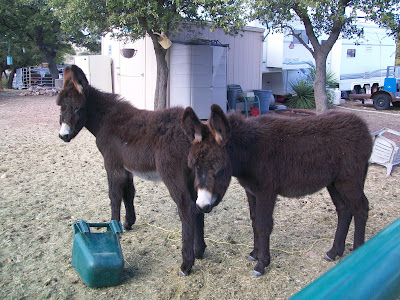 They both are suppose to have new homes, but the people haven't picked them up yet.  James told the man if the people don't show up, to let him know & we'll take them.  Since they have been raised by people with bottles, they really don't know they are donkeys.  A few weeks out here would really be good training for them.   Bottle babies can really be a challenge, if they don't learn they are donkeys & not people.  We've had a few come thru here that were bottle babies or weaned too young & not kept around donkeys.  They end up confused & difficult to work with because they really don't know how to behave like a donkey.  We had one we thought was going to get knocked down, because she didn't know an ear moving in a certain way meant, "GET OUT OF MY WAY"..........!!!  She's come a long way, she now has Chili to boss around, which she does very well, & Sherry is their loving slave, so she was lucky.  A lot of these bottle babies get very frustrated & just don't know how to deal with other animals or people & never learn. 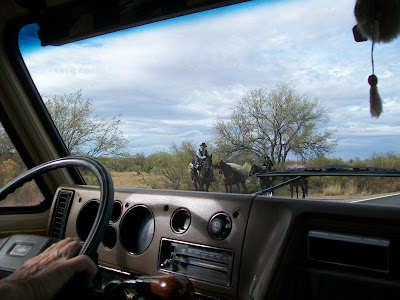 We saw these 2 people with pack horses riding beside the road when we headed for Marana with the mares.  I almost missed them, as you can see.  I was reading  (that's what I usually do if I'm not driving) & John said, "look at that"...!!  I grabbed the camera, & clicked as we flew by, so I guess I'm lucky to get anything.  Certainly didn't have time to take another picture.  They looked like they were travelling, maybe there will be something in the paper in the next few days.
Got home & had an e-mail message offering to foster Flora & Fauna from a woman I don't know, but she referred me to 2 rescues that know her.  I also had a phone call from a dear friend that has 2 of our donkeys.  She has a friend that is very interested in fostering the girls.  WOW!  I was afraid no one would offer to foster them & we'd have to go over our self imposed limit.
Posted by Tish at 10:06 PM