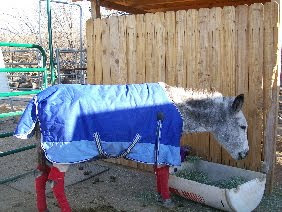 It's a Weatherbeeta, which in our price range, is about as good as it gets.  It even has a little tail flap, to keep his tail warm.
He's been walking really good for him the last few days.  In fact this morning he has been "chasing" the girls like a dirty old man. " Chase " might be a little over the top for what he is doing.  Long distance stalking might be closer to the truth.  All Daisy, Frijolita & Hanna have to do is walk off & here he comes toddling along at his little old man pace.  But the ears are up & he has a purpose in mind, if he can just catch up & make them understand what a fine catch he would be.  Of course if one of them did agree that he's "sorta" cute the logistics would keep him from his goal.  He can't hardly stand on 3 legs for me to clean his feet, let alone anything like foreplay..........!!!!  But he's hanging in there, so good for him.
Paladin is actually behaving himself for the most part.  This morning before roundup he was irritating the girls, but not chasing them & being rough.  It was more like the little boy on the playgound being obnoxious.  He was playing rough with Buddy, but no missing hide or blood.  I went out & told him to leave the girls alone.  He looked at me, spun around & headed for his pen.  I thought "this is great" he's really listening to me.  Got to his pen, & took off at a dead run for Burroland, where the bulk of the herd were.  Maybe not listening so good, but when I went over to Burroland to get him, I told Tula to bring them home, & everyone headed for the pens.  Paladin really didn't want to go in the pen, but a couple of false starts & me pointing, he finally gave up.  Today will make 2 days & one night he's been out with the girls & not had to be separated.  I hope it continues like this, sure makes life easier on everyone.  The girls hate being in their pen overnight, & I can't blame them.  And he hates being in his pen during the day, so if he will behave himself it's a win, win situation for everyone.
Posted by Tish at 10:47 AM

It's a beautiful blanket and the tail warmer is so cute.
Use it in good health, Pepper!

I think it makes him look rather dapper. He is such fun to watch, I hope he's around for a long time.