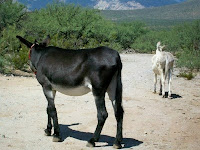 We let him out this morning, right after breakfast. He seemed to think this was great fun, even with all the eyes watching him. This is Jenny the mammoth watching to see what he is going to do next. Frijolita & Daisy followed him around for quite awhile, not sure why. I was in the pens & heard the thunder of hooves. Looked up & Quilla was headed for safety.........his pen. Unfortunately the girls were right behind him, & followed him in. As if that wasn't bad enough, BlackJack was already in there finishing hay scraps. Not the safest place in the world after all. The girls weren't being mean, it was like they wanted to check him out & he didn't want to be checked out. BJ could care less, he was interested in the hay.

They got all sorted out & headed out to explore. You might ask why the girls were even out. There has been no mesquite beans in poo the last 2 days. So everyone got to go out today, including Buddy Brat. They all really need the exercise, although I think Quilla will probably be pretty lame tonight. Everytime I've seen him today, he is limping a little more. But long term, the walking around should be good for him.


I finally got the honey today to try on the horrible sores on his legs. I have been trying to clip the hair around the sores, but for some reason my little Wahl clippers have went on the blitz. John took them apart & doesn't see any reason for them not to be cutting. The big clippers are really too big for doing legs, so I may end up using scissors, if I can get him to hold still. He's still a little antsy about having his legs messed with. I'm sure it would be a good idea to clip the hair before putting honey on the sores unless I want a sticky mess. It's probably going to be sticky enough even with the hair clipped.