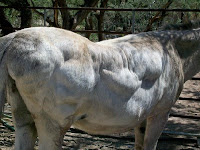 Quilla has the classic pones caused by taking in more calories than his body needed over a long period of time. He doesn't seem to be a greedy eater, so it just a case of too much being available. His feet don't look like he's ever foundered, which would be a miracle, & he's certainly not Cushings. So we'll just put him on a diet, & see what happens.

Courtney got here just about dark last night. I knew he hasn't been haltered or led for over 9 years, so at first we tried just letting him stand & pick up his foot. No, he wasn't interested in such treatment. I put a lead on him stood at his head & gave treats as I felt necessary. He acted like a perfect gentleman, even with her using a headlamp, once he figured out she wanted him to lift his foot & I dispensed goodies. He seems to be as sweet natured as Daisy is, no spook, John drove by his pen this afternoon, dragging a car behind the tractor, & he watched the whole process like it was interesting. She had a hard time trimming on his clubfoot, it's growing every which way. She said it would be a good idea to get an x-ray to see what's going on inside, so we'll have to figure out a way to get one. We could haul him into the vet, but I'm not sure he would appreciate the trip, & I don't plan on needing a vet out here for awhile hopefully. Courtney plans on coming back in a couple of weeks, so we'll see how he's doing then. I'm sure his foot feels better to get all that gnarly growth off, he was walking on part of the hoof wall on one side. He was a little ouchy this morning, probably because the tendons & ligaments are being used differently after the trim.

This morning I spent about an hour upwrapping & doctoring his front legs. In the process, I found other areas on his hind legs, sheath & belly, that although smaller & newer looking need to treated agressively. I used 2 tubes of ivermectin just to cover all the areas. They make a liquid ivermectin to worm cattle with. I'm thinking of getting it & putting it in a spray bottle. The horse wormer is rather messy to use like that & difficult to make sure you covered everything.

This is going to be a long process.
Posted by Tish at 5:04 PM