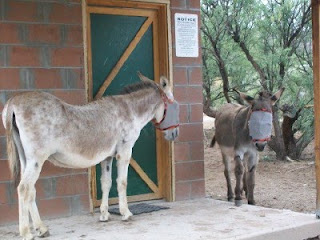 Courtney finally made it out to trim. She had been trying to get out here for a couple of weeks, & something always happened. Today a feral cat she had been keeping in her bathroom, got out in the rest of the house, & it sounds like he made a heroic effort to get out. Tore down all the curtains, & cleaned off all the shelves & anything else up high. So she was later than she expected, guess she was trying to tidy up her house. She managed to catch the cat & took him back to where she found him. He doesn't sound like he wants to become a pet, unfortunately.

The trimming went pretty good, she was thrilled with how good Chester is walking. Jenny isn't doing too good right now. She has abscessed in both front feet & the hooves look what they use to call shelly. They don't look solid. I'm afraid to soak her feet, they look like they would fall apart. She did so good for over a year, & all of a sudden they really look nasty. She's walking OK, but not as free & easy as she was.

Everyone was fairly cooperative, although Daisy makes all the others look like wild donkeys. You touch her leg & she raises the foot. Then she just stands there until you're done. None of the others are that nice about it, although they have been worse in the past.......!!!! (G)

We didn't know if she could trim on Pepper. He is so lame on his right rear he has a hard time raising the other feet. He did pretty good, she only trimmed his fronts, & did it as quick as possible. Last time she tried to trim him, he almost fell over, so he was better this time.

And Jack the mule got his first trim in years. Just the fronts, Jack can be a real challenge to work with. He did pretty good, although we could tell it wasn't what he had planned to do today, but he wasn't as bad as he could have been. I seen him at his worse, when we use to try to give him shots...............!!! (G)

The new donkey comes in tomorrow. All the pens are full, so I guess Chester & Tula will have to double up again, at least for a few days. Then he'll go in the Fat Farm with the girls & Buddy until mesquite bean season is over. Even though the girls probably wouldn't bother him, Buddy can be obnoxious & this way he will have a few days to get use to all that goes on around here. He's been by himself for 2 years, so this will be quite a change in his lifestyle.

I checked the gate into Burroland today, & there are footprints going in & cow patties here & there. Hopefully it won't take too long before the donkeys can go back over there.
Posted by Tish at 5:23 PM