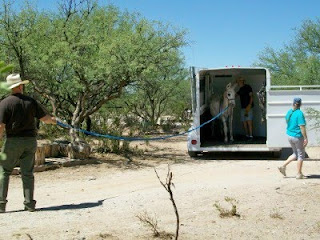 This is Quilla when he arrived. They said he wasn't that difficult to load, so we assumed he wouldn't be hard to unload. Does this look like the stance of a donkey that's ready to get out of the trailer? I guess he figured since he had already ridden in the trailer & it hadn't killed him, he'd just stay there rather than face the unknown. John's in the trailer irritating him with a whip. He's looking at his Momma as if to say, "get rid of this horrible man Mom & let's go home". But he finally hopped out. He's not real big on leading, so it was quite an operation to get him to his pen. But we made it, & right away Chester came up to greet him.
He's been eating real good & I'm not sure who has the most pones, him or Daisy. He doesn't look Cushings which is great, & we feed a basic Insulin Resistance diet anyway. So we'll just watch the amount of hay he gets. I'm afraid he's going to miss his bran & COB though..... (G)

His feet have not been trimmed for years. He's actually self trimmed pretty good, except he has a club foot on the left front that needs some attention. It's clubbed, & flared on one side & rolled under on the other. They thought he is crippled, but I would imgaine when that foot is trimmed correctly he'll walk a lot different. Courtney is going to try to come back out Monday & we'll see if he likes getting trimmed any better than he liked coming out of the trailer. His Mom picked his front feet up, & he didn't fuss. But we'll see how it goes.