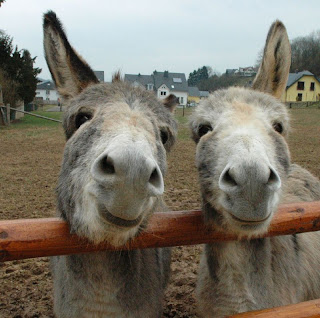 Well last night was certainly one of the most interesting I've had in awhile. I was on the computer, & the cats were at the back door acting like Hobo the outdoor cat was there for her supper. I looked & there was a skunk cavorting on the back porch. Guess it was too much to ask that we never have skunks again. So I got the brillant idea to go check in the chicken pen to see if there might be one over there. Looked behind the nesting boxes & there was a fluffy black & white tail wiggling around.

I was afraid to leave the area since the chickens were right there & I had no idea how long it would take to gather up cages, & traps & whatever else I needed. So I plucked the chickens off their roosts & stuck them in one of the guinea pens. I knew I couldn't haul them in the big cage like we did before, John had to steady it on the hay wagon, while I drove the golf cart. I found that the small cage we have fits perfectly in the hay wagon. I put the big cage in the garage, & headed over to gather up the chickens. Good thing we only have 7 hens & Rowdy the Rooster, I don't think I could have stuffed another chicken in the cage. Set the trap in the pen, & brought the chickens over to the garage & moved them into the big cage. I'm sure by this time they think I've lost my mind, I know one thing I slept good last night..........!!!! (G)

I was dreading going over this morning to check the trap. I don't want to have to haul a skunk by myself. I'm sure somewhere in the process I'll either uncover the trap or drop it. Either way I'll probably get sprayed. But I guess all my running around, with lights, making noise, & grabbing chickens made him decide to leave the area as soon as possible, because the trap was empty...............!!!!!

I talked to John tonight & he said to shut the chickens up in their house, & set the trap in the pen. That way I don't have to put them in the garage, I just hope the skunk doesn't ignore the cat food in the trap & go for something a little tastier.

This afternoon a group of about 15-20 people came to visit with the donkeys. I thought they were coming next week, so I hadn't kept the donkeys in their pens. That means they can be anywhere on the 30 acres. We were lucky though, as the cars came in they had to almost drive thru the herd. When they came up to park, the horsey group was standing around, & while we were talking about them, the donkeys started coming up the driveway to mingle with the people. So it worked out really nice. Everyone behaved themselves, except for Max the horse scattering the donkeys. He wasn't really being mean, he just moved & they quickly moved out of his way. I'm always a little leery of letting the donkeys mingle with people. Although none of them bite or kick, they are still large animals & a lot of people that come out have never been around large animals & don't know how to read body language. If they are out when people visit, we never let the people feed them. Some of them will compete for food & that could be dangerous. But I think a good time was had by all, & the donkeys got lots of pets & attention, that's almost as good as food.......well at least for most of them..............!!!!

John's Mom will have surgery tomorrow. When he comes home, will have a lot to do with how well she gets along.
Posted by Tish at 7:20 PM