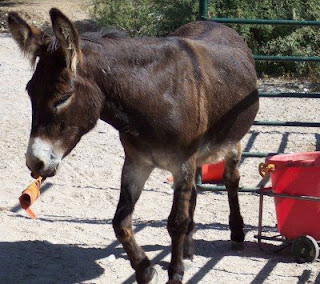 We checked out Rocky's new home today. He will have a friend named Harley, that almost looks like his twin. Harley really is a neat little guy, loves people & wants to be where the action is. It should be a wonderful home & I have no doubt they will become great friends. We almost always haul the donkeys to their new homes to make sure they settle in without any problems. Both Rocky & Harley are not territorial or aggressive in any way, so I don't anticipate any trouble.

This Thursday Daisy's mom is coming down from Prescott to visit Daisy. We've only talked on the phone, so it will be nice to meet her in person. So far Daisy hasn't found a buddy. I'm sure once she gets settled in she'll find someone to hang out with. Yesterday afternoon we fed early, which was a first for her. John had her to her gate 4 or 5 times & she would just keep going. Usually she walks right in, so we don't know if rounding her up early confused her, or if she was playing with John's mind. I came out of the feed room, pointed to her pen & told her to "git". She promptly went past it. I don't think she was impressed with my authoritorian attitude, because she turned around & went right in, once she had shown me she didn't have to "git".

Once Rocky leaves I might try feeding Daisy with Buster, Lucy, & Frijolita rather than by herself. They along with Rocky eat at bunks that aren't in pens. But Rocky is what you might call an energetic eater & thinks it's his job to make sure no one leaves any food in their pans or hay in the bunks. Those 3 hold their own with him, so he doesn't get away with much. They are all about as gentle as she is & if she eats with them, she would probably start hanging out with them too. At least Buster & Lucy, Frijolita is usually with Tula's herd.
Posted by Tish at 7:50 PM