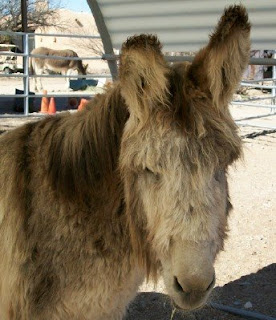 I took a quick picture of Daisy this morning, since I didn't get around to it yesterday. Contrary to what it looks like her ears are the same length. She's hard to take a picture of, she is a pocket donkey & wants to be where you are. Isn't she cute, she looks like a stuffed toy, with all that hair. The picture doesn't really show how much hair she has. I noticed yesterday she stood wherever the shade was, & it isn't even summer yet. I have a friend that grooms dogs & she has industrial strength clippers. We might body clip her for summer, I'm sure she would be much more comfortable. Also the next time I have a vet out here, I will have a insulin/glucose blood draw on her & probably also run an ACTH test for Cushings. She has some symptoms & even if she isn't I like to have numbers to start with, for the future.

John got in last night, & I must say, chores went a lot quicker this morning than they have recently. I figured out a couple of changes that "might" make things go smoother. Notice I said might.......!!!!! We've always fed hay in 2 separate runs with the golf cart. But I think I've figured out a way to do it in one run. We'll find out when we feed this afternoon. One change will be busy little Rocky is going to go into the Fat Farm with BlackJack & Cisco, rather than staying out with Lucy, Frijolita & Buster. He eats his pellets & beet pulp real quick, & then runs all of them off of theirs. I think he will find BJ & Cisco a little more challenging. I had originally wanted him to bond with Frijolita, they would make such a cute couple. But I think he has burned his bridges for any relationship with her, by being an obnoxious little boy. She doesn't appreciate his "in your face" way of interacting. So it doesn't matter if they are together or not.
Posted by Tish at 9:46 AM