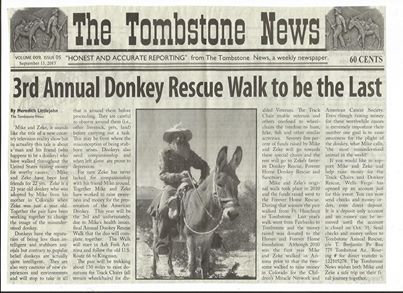 This is from the Tombstone News covering Mike and Zeke's upcoming walk.

Today we are going up to the Oracle area to help the couple we hauled the 7 donkeys for a couple of months ago.

They lost one of the jenniess because of massive internal infection, but still have 3 jacks and 3 jennies, of course, that are probably pregnant.  I found out yesterday they have in fact adopted all 6 and are no longer just fostering them.  WOW, I don't know if I'd take on 6 feral burros at once.....!!! LOL

Anyway we're going up to build them a "redneck" squeeze to help them work with the burros.  They have no small area or anyplace to isolate one to work with it.  Not sure how it will go, but we'll give it a try.  I've never tried the squeeze with jacks.  Two of them are pretty young and hopefully malleable.  The other one is probably responsible, not only for the 2 younger jacks, but the jennies being pregnant, although he doesn't "look" very old.  Jacks as they get older usually get more opinionated on being "messed" with and can really make their point, if they want to.  But we're hoping since they haven't been "cowboyed" at least since they were captured, for cooperation on their part.