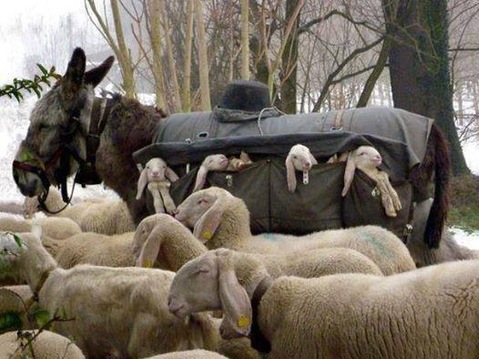 "This is NOT what I signed on for"

Between doctoring and quite a few phone calls and e-mails about donkeys, I'm staying pretty busy.....LOL

I think I polo wrapped 10 legs this morning, and could have wrapped 4 more, but John couldn't find my "stash" of polo wraps.  So Penny just got her legs covered with thuja zinc oxide.  I found my other wraps afterwards, so tomorrow she'll probably get wrapped.

Today was the first time I had doctored her without using the "redneck" squeeze.  John was responsible for keeping her entertained and I decided to try.  She did just fine, of course the amount of animal crackers he stuffed in her mouth probably had a lot to do with it....!!! Ha!

Have a family looking for a new home for their two donkeys.  Said one is a jenny and one a jack........!!!  Not an easy sell to find a home for a jack.  The clarification said the jack is gelded...........!!!!  HUH?  Words have meaning, and to me a jack is intact and a john is a gelding, if you want to get technical.  Most of us just call them geldings.  Same with jennies, they are technically jennets, but who calls them that?  Not many people I know.  So I've put out the word.

Just talked to Frijolita's former mom about their other two jennies.  One of them either Chimi or Taco coliced a couple of days ago with sand colic.  The vet said to give them psyllium which is SOP and in fact a lot of people give their equine phyllium on a regular basis to prevent colic. But the girl's have made a judgement call on psyllium, they "ain't" eating it.  Ellen called to see if I had any ideas.  Not really, the few times I've used it, the donkeys didn't have a problems scarfing it down and looking for more.  We also discussed, it might be time to start looking for a home for the girls.  Chimi is about 30 and came to them pregnant, Taco is about 27 and has never be off the property.  Ellen and Charlie both have health problems.  Frijolita originally came out here because Margarita coliced and died.  She was odd man out with her friend gone, the other two wouldn't let her in to the inner circle.  She's been here probably 6 or 7 years and has bonded with Daisy, which is one reason we haven't tried to find her a new home.  She is very adoptable, but Daisy isn't because of having Cushings.  Besides if we need a gate opened she's our "go to" donkey.......!!! Ha!  I would imagine eventually the girls will end up out here.  Sure would be nice to get our numbers down before then.
Posted by Tish at 2:40 PM

I know your I'm going back to last year, but thought I'd mention that EQUUS Psyllium Pellets seem to be highly palatable and don't have added sugar for those fat little donks that must avoid it. My donkey loves them! They smell like licorice. (My horses love them too, but they aren't nearly as picky.)