The morning started as usual.  John usually gets up about an hour before I do, has his breakfast, watches the same news he saw last night and gets ready to face the day.

When I got up and started working on the computer, I immediately noticed the cats are bouncing off the patio door way up high,  and trying to destroy the blinds.  Neither behavior is particularly unusual, except for the fact they usually wait until we're asleep or not here to do these type of things.  Then we are met with damage and 4 innocent little cat faces.  It's like kids, if there are 2 or more, no one is EVER responsible.

I ran Snooky and Sunny off 2 or 3 times and finally bothered to see what was so interesting. 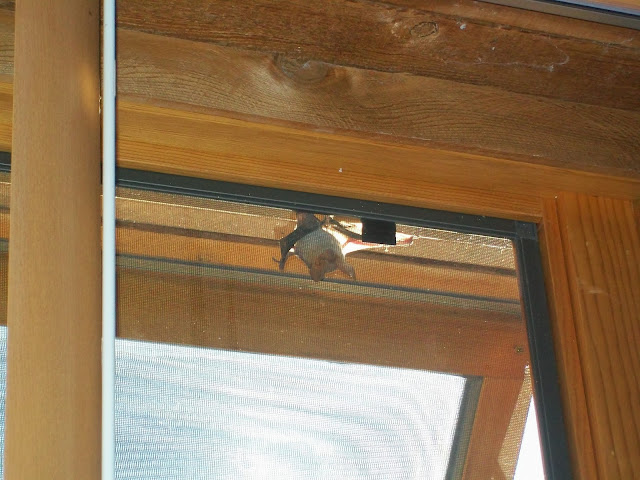 This is a little Pallid bat, that somehow had gotten in between the transom window and screen over the patio door.  It's daylight which means he doesn't want to move.  What to do, what to do.........????

Well of course the first thing is to yell for John and turn the problem over to him...!!! LOL  We watched the cute little thing (I've always had a thing about bats) which it didn't appreciate, the more we watched him, the more agitated he got.  John's idea was to get the ladder and some heavy gloves, catch him, put him in the snake box and haul him up to the hay barn.

It really went pretty good.  John climbed up the ladder, tried to catch the bat, as it flew out & landed on the courtyard gate.  OK, time for plan B.  They obviously have very good hearing, because as John moved towards the gate, the bat went to the other side.  But, John managed to get him in his gloves and we got him in the box, squeaking and biting.  John had on pretty heavy leather gloves and said he could feel his little teeth biting the gloves.

John said when he poured the bat out on the hay in the hay barn, it flew out the front and disappeared, hopefully in the other little barn where John keeps all his "guy" toys, like tractors, bobcats and golf carts. We've seen bats roosting in there before, so hopefully he found some of his friends.

As we are winding down into fall, my doctoring is getting a little easier.  Although yesterday, I found a nasty place on Quilla's fetlock, where the polo wrap had slipped and left an open area for the flies to work on and work they did.  So I had to really "doctor" rather than the casual way I get away with as their assorted wounds heal.  I'm SO looking forward to fall and winter, and I'm sure they are too.  I know they are ready to get rid of fly masks, polo wraps and all the other things they have to put up with.  Probably won't happen until in November sometime.  Since we really don't have winter per se, we have flies year round.  But by November their numbers have declined to just a few that we have to live with.

When it finally cools off, I have to make the effort to work with Penny.  She's got a lot of trust issues, probably from being a roping donkey.  At least she isn't fear kicking anymore, but we haven't done any training this summer.  She now lets us pet her and I can even doctor her legs without using the "redneck" squeeze, as long as it doesn't take too long or get too envasive.

Haven't heard anything about when Boaz, Ruthie and Wister will be coming back.  Not sure how long it takes 3 donkeys to eat down 5 acres of weeds, but I'm sure they are doing their best.
Posted by Tish at 11:07 AM