Sundays after Saturday night races is always pretty low key.  The donkeys get fed & that's about it for the day.....!!!!  John sits in his recliner & "watches" the race he taped last night.  We already know who won, & he isn't a favorite in this house, so John doesn't mind missing most of it as he catches up from getting to bed about 3:30am. 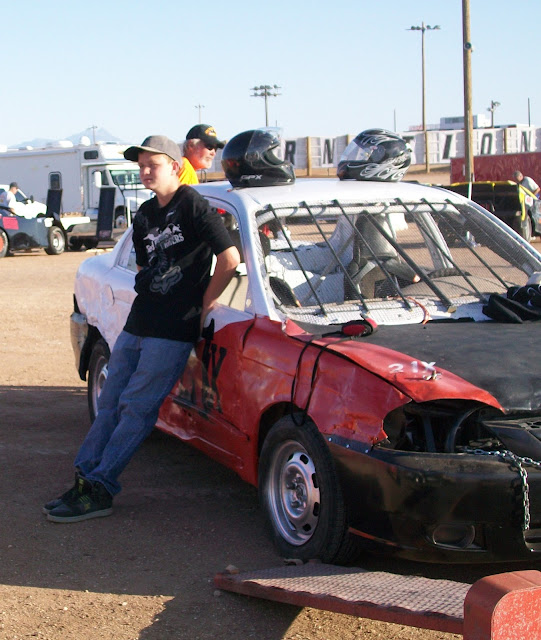 This is Reilly, my passenger for the night.  He's somewhat of a gear head, and I think he had a good time.  We finished 2nd in a rather ho hum heat race.  The main event was a lot more interesting.  He got to see other cars up close and personal, we "kissed" one of the big tractor tires in the middle on our way to get back on the track, after someone had rudely sent us in that direction. We did some "agricultural" racing, which happens when you go into a corner too fast or too high on the track.  It's a good thing our track doesn't have walls, or I'd never survive.........!!!  And I didn't tell Reilly, but the the last 2 laps were a little more exciting than I expected.........the gas pedal stuck wide open.  That's when we did some of that off the track agricultural racing, we were going into the corners a lot faster than I wanted to.  It "fixed" itself just about the time they threw the checkered flag.  John will check it, but it probably got some clay or a rock caught up in the cable.  Not a fun experience.

One of the cars rolled over which brings out the red flag.  That means STOP right now, wherever you are on the track.  I stopped behind one of the other cars & all of a sudden BANG.............!!!!  Someone wasn't paying attention I guess..!!  Of course it pushed me into the car I had stopped behind.  I asked Reilly what car it was, he said black.  About half the cars are black & he couldn't see the number.  I figured whoever it was backed up, so I decided to back off the car in front of me.  When I backed up, the "black" car was still there close enough I got him.  If you believe that, I'll sell you some ocean front property in Arizona........!!!  Heh, heh, heh...........!!!

John was so proud of his new bumper he got to replace the partial bumper from last race day, see how shiny it is & not a scratch on it in the picture above? 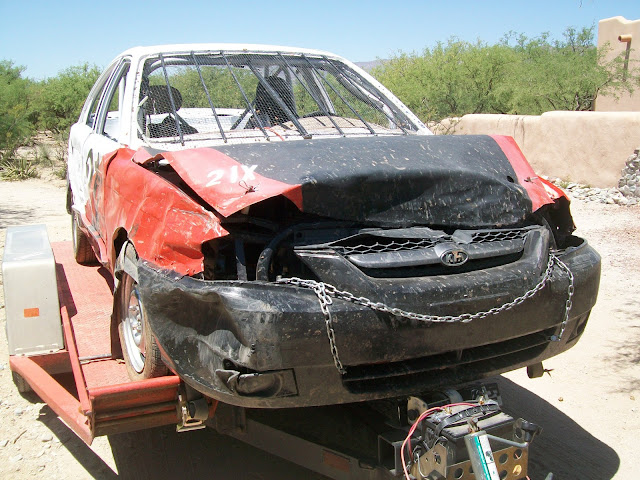 The hood doesn't look so good either.......!!!!  LOL
The back has a few "wounds" too, for some reason last night was pretty rough.
We managed to finish 6th.

We got home so late because our good friend Larry won his 3rd race & the track wanted to see the inside of his motor.  It takes awhile to tear down a motor, even with lots of help.  He was legal, which was a disappointment for some other Factory Stock drivers.  Larry's a real good driver, he doesn't need to cheat.  He's won main events in 5 decades & has a chance for another championship this year.  He has been a champion at other tracks, but not this one.  Hope he gets it.....!!!
Posted by Tish at 12:00 PM