We rushed around this morning to get to Tucson for Wister's appointment with "destiny".  Ruthie actually loaded real easy, & Wister still hasn't figured out how to jump up into a trailer.  Don't know why, since his answer to being restrained or anything is to get those front feet up in the air.

This is the first gelding that I've ever attended, that was done inside, under clean conditions, rather than in the dirt.  Like a lot of donkeys he didn't go down easy, she finally gassed him rather than giving him more drugs. 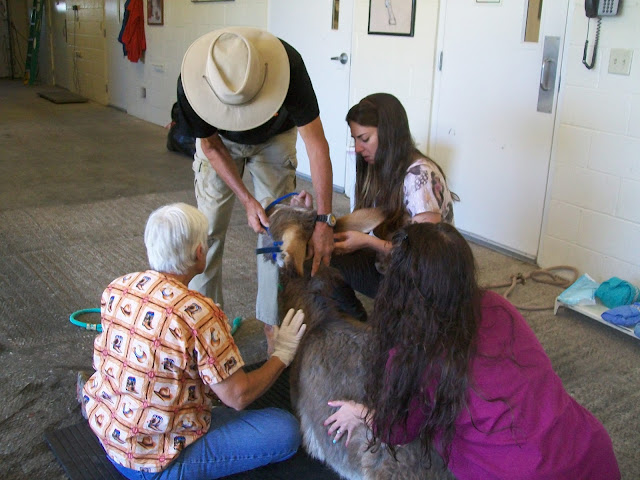 She did a closed gelding, didn't have to use the emasculator because his little goodies weren't very big.  Tied him off & there was hardly any bleeding at all, left just a little opening about the size of a dime, where she "popped" his little "marbles" out before she tied them off. 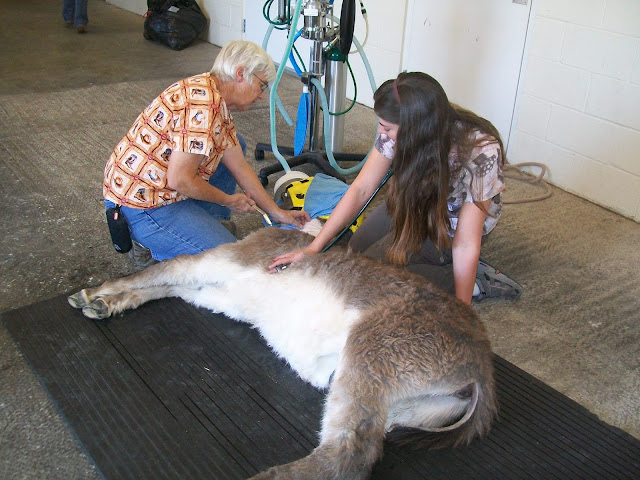 The yellow helmet on his head is designed to keep them from hitting their head if they flail around.  Never seen one before, has eye holes, really a great idea. 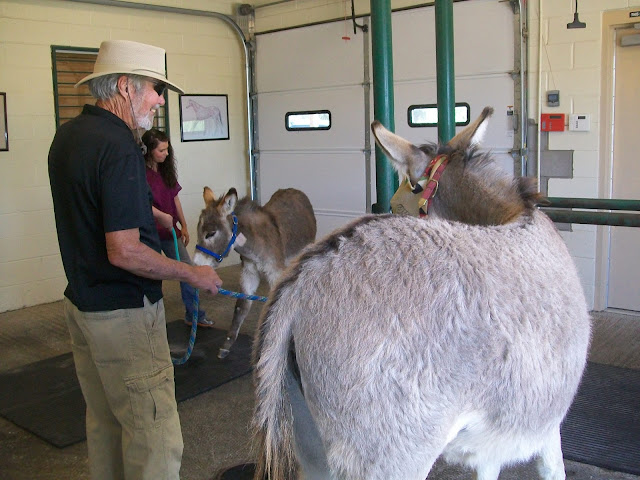 Wister was enjoying his "nap" so much we finally brought Ruthie out of the trailer to get him up on his feet.  We tried to get her to bray from the trailer, but she wouldn't.  She didn't want to go inside because of the change in light, but when he saw her & started moving around, she figured out what was going on & dragged John to where Wister was.  Once he was up it wasn't but a few minutes until they were in the trailer & we were on our way.

All in all it was as pleasant an experience, well Wister might disagree with me, but compared to other "slash & bleed" geldings I've attended this one went very well.  Hopefully in the morning they will be able to go out.  Moving around is suppose to cut down on swelling, but for tonight they can stay in.
Posted by Tish at 8:26 PM

Glad things went well. Keep us posted on his recovery. He sure is a cutie!

The clinic called this morning to see how he was doing. I told them he was trying to get his momma's fly mask off & seemed to be doing just fine except for a little bit of swelling. He's out with the herd now, so he'll get plenty of exercise.

Dr. Page? I like her (and Dr. Staten) even though she isn't always "up" on Cushings/IR stuff.
I like that they had oxygen and emergency equipment right there - just in case. Do they leave the small incision open for drainage?

I assume the little opening is for drainage, although she pushed it together, rather than making sure it was open. There was no drainage at all, & still isn't from what I can tell. He isn't really interested in you looking at it, let alone check for moisture....!!! LOL