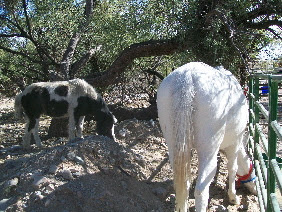 C.J. is on a little hill, so she doesn't look as small as she is compared to Rusty.  When I let her out, she immediately started eating mesquite leaves & whatever else is available.  It only took Rusty a minute or so to figure out she was out & catch up.
None of the donkeys have paid any attention to her since she's been out, although BlackJack did appreciate her pen being open, so he could see if she had any leftovers.  She actually isn't a beet pulp type of gal, at least not yet, so there was enough to make him happy.
The joints in her hind legs are real loose, they wobble when she walks.  Hopefully by getting her feet trimmed on a regular basis, & maybe not having foundering episodes, she can roam around & get some strength in those joints.  Don't know if it will help or not.
Posted by Tish at 12:02 PM

She's so cute. Yes, the hoof trims should help her move around better and that should help her muscle tone and end the wobbly hind end. I've had horses in the past that had that problem because of injuries. After regular exercise they get better.

That's what we're hoping will happen, she doesn't seem to be in much pain & is willing to move around at will.