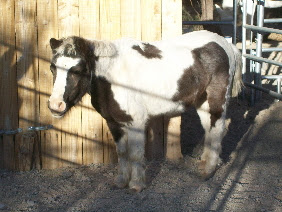 Her little ears are so tiny, it's hard to find them in her mane.  She is very sweet & cooperative.  When we were loading her in the trailer, although her feet hurt, she was trying her best to get in the trailer.  She loves to talk to you, if you talk to her.  Her little voice sounds like she's on helium, certainly a lot different than a donkey letting loose with a nice long loud bray.
When we parked the trailer, of course the usual suspects were waiting to see what we brought home.  She whinnied & Rusty the white mule went nuts.  He was running around bucking, kicking & yelling.  I finally had to get a whip to let him know he was getting too rambunctious.  She stumbled out of the trailer, & followed John to the pen, as I guarded with the whip.  I think Rusty spent the night standing by her pen.  I don't have much hopes for this relationship, she's just a little over knee high to him.  He was the one that missed Shag  the most.  That was the little mini horse that broke his hind leg a couple of years ago & had to be euthanized .  So maybe he just likes to have little friends.
FRONT FEET 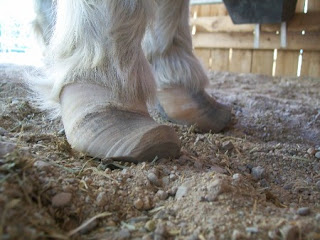 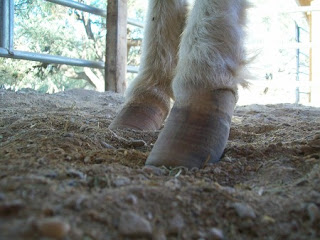 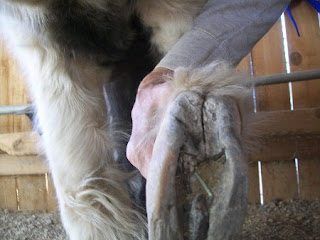 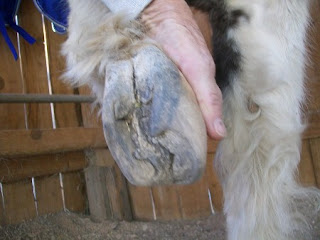 
Courtney is going to try to come out Thursday & get some of the extra hoof off, so CJ will be more comfortable.  She is suppose to be Cushings, but she looks & acts more Insulin Resistant to me, so I guess we'll be doing blood tests, as soon as possible.