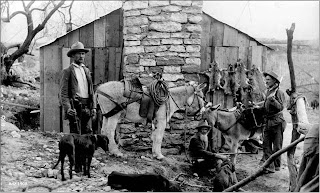 Yesterday John & I took turns all day long babysitting our little stars. By this time they had become pretty resigned to their fate & even Buddy was a lot quieter. They stood in the same position, just in case the camera shot scenes in their vicinity. They actually did do some shooting & in fact shot a rifle over Cisco's back. John said he didn't seem very upset about it.

When it came time to come home, John had 2 donkeys & 1 golf cart to get home. He decided to try "ponying" both of them off the golf cart. He tied them to the back, drove slow & said they followed along like they had done it before. It started getting dark before they got to the big scene, with horses running around & guy's jumping on them right by the donkeys..........sooooo.......they had to go back this morning. And today they also needed another donkey that looked different than those two. So it was BlackJack's turn to be a star.

This morning we took BlackJack over. He was suppose to have a pack saddle on, but the guy that was suppose to show us how to put it on wasn't there, so we just tied BJ to a hitching post, & put the saddle on the boardwalk. He stood there all day long, while they filmed up & down the street. This afternoon we had to bring Buddy & Cisco back over for the final shoot up by the mine. The one horse that was suppose to come running down the hill, when his owner whistled, so the guy could leap on his back & ride off, has probably never seen a donkey before. He wasn't impressed, spun around & took off up a very steep hill. Of course by this time Buddy & Cisco have decided they don't think much of him either & are bouncing around like jumping beans. Perhaps they all should have been formally introduced, rather than just throwing them together & hoping for the best. They finally moved Cisco farther away from the trail, & then shot scenes with the horse at different places along the trail. Of course everytime they turned him loose to answer the whistle he took off like a race horse. They finally called down to the town to have an EMT come up just in case they needed one. One guy was laying beside the trail, he was suppose to be dead. One time the horse actually jumped over the guy...........!!!! A horse won't step on a person if they can help it, but who wants to test that theory?

Destiny, the girl that helps with chores & I brought Cisco & Buddy home when they were finished, while BlackJack & John stayed for street scenes. I was trying to change halters & was just about halfway between the 2 halters when a couple of horses & riders came trotting by. Cisco decided he was going home, & took off. One of the guys on the horses said Cisco was hiding over in the mesquite. I said he's not hiding, he knows that's where the gate is. Sure enough when we got over there he was ready to go in.

The schedule for tomorrow is, BlackJack has to go back for his street scenes & "Oh by the way, do we have a different looking donkey for a miner to lead down the street"? We've about ran out of any that look good & also lead, but we'll try Frijolita, at least she leads.

I hope tomorrow is the last day of movie making for us. That will leave just Friday to get ready for the Open House, Saturday & Sunday. It's been really interesting to watch how they do things, I'll probably never be able to watch a movie again, without trying to figure out how they put it together.