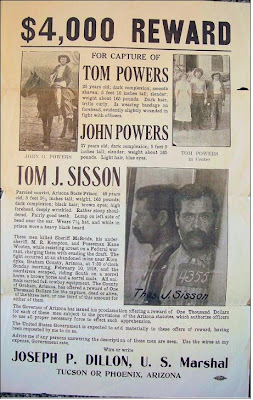 Our movie making is over as of this afternoon. We took BlackJack & Frijolita up this morning at 10am & noticed right away that no one else was in the town. They were all down in the wash filming some chase & fight scenes. The one thing I've learned about movie making is............. being given a starting time is only a suggestion, the chances are it will be hours or the next day before they get around to you. They finally got to the street scenes about 2pm.

Frijolita was willing to lead over to the movie site this morning, until she saw all the new & different stuff, people & noises. So John walked her around & showed her everything. After a couple of trips around the town, she settled down. The miner didn't lead her down the street, he just stood by the donkeys & petted them, when they were filming. They were just background for a guy leading 2 horses in with dead bodies hanging across the saddles. Those poor guys were in fact alive, what a way to get into the movies.......!!! Frijolita wasn't too impressed with 3 horses walking back & forth behind her, but she didn't freak, which was a definite possibility.

John had to go to Tucson today, so when it came time to come home, I had 2 donkeys, a big bucket of hay, a pack saddle & a golf cart to get home. I brought Frijolita home first, brought the golf cart back to the movie site, led BlackJack home, walked back loaded up the golf cart & came home........!!! Whew! Like one of the women said, that was doing fun things like sweeping the dirt street, so tennis shoe tracks wouldn't show......or taking down a perfectly good sign on a building to put up another perfectly good sign, "I will never look at a movie again, without thinking how much hard work there is in the background". She also said something about the wrong people getting the Oscars...........!!! (G)

Of course during all of this we had a crisis, the refrigerator in the feed room decided to become a very good freezer, rather than a refrigerator freezer combination. The crisis isn't so much that the refrigerator croaked, it's a 1968 model, so it was overdue. The problem is to find one that is the same size or smaller. I really hate to pay for a new refrigerator, but the chances of finding a used 10 cu ft one probably isn't very good, especially if we want it anytime soon.

We've about ran out of time to get ready for the Open House this week-end. We're down to tomorrow to get ready, so if it doesn't get done tomorrow, I guess it won't get done. Oh! well I guess the sun will rise anyway, so no big deal.
Posted by Tish at 7:03 PM

Tish & John-- Having your donkeys on set last week made our mining camp and 1893 western town so much more authentic. Everyone commented on how well you take care of your animials. The amount of love you show them is incredible. I hope those donkeys realize how lucky they are to be at your facility with all the TLC! It was a pleasure to have you on set, and John sure looked good dressed up (or is it dressed down?) as one of our extras. Thanks again for being such good sports and sharing your wonderful donkeys with us.

Hi Terri Jo:
Thanks for the kind words, we really had a lot of fun, John's been telling everyone we had 5 asses in the movies. If you count only 4 of them had 4 legs......!!! Love the picture you took of John & BlackJack, John did look pretty good, he even got to wear his own hat & boots, which he thought was pretty neat. Tells you how worn out they are.....!! Oops I really meant "comfortable"...

Everyone on the set was very nice to us all & it was a wonderful experience. Not sure I'd have the patience to do it all the time. I never realized how much effort goes into making movies. It's really quite an art.

We get much more out of working with the donkeys than we put into it. They are such wonderful creatures & are one of the most misunderstood animals in the world. It would be great if someday in the future there was no longer a need for rescue & sanctuary. We can only hope.