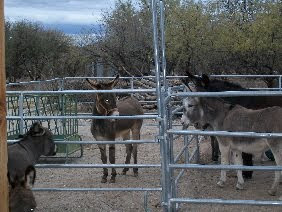 Hmmm.....nothing like being the new kid on the block, especially when you arrive about suppertime.

Needless to say she was very interesting to the gang. She hasn't seen a donkey in 2 years, so I think she was rather overwhelmed by all the braying & attention.

When we went to pick her up, she was in a large area & we found out although she will follow people around, she is afraid of ropes. John backed up into a corner, she was willing to walk behind the trailer, which basically trapped her in the corner. But she wasn't willing to "hop" into the trailer. It took about an hour to finally get her in. We did find out she isn't a kicker, which is always good to know.

She's really quite friendly with people, but not sure if she wants to buddy buddy with them. That's OK, we'll give her a few days to figure out her new lifestyle. She's a very pretty girl, I'll get a picture of her soon. Right now she is in with the other jennies, during the day & by herself at night when the girls go out. Paladin is still acting like a stupid little teenager. Jenny is finally walking without limping, but we don't want to put her out with Mr. Busy Body again. So he's hanging around the "girl's" pen yelling & prancing around to show them how wonderful he is. All the girl's are in except Tula, she seems to be able to put him in his place & keep him there.

Since Lucy is in with the girls we have to figure out what to do with Buster. He was running himself crazy trying to "protect" her from Paladin. The 1st couple of days we put Buster in with the girls. But this morning I put him out. So far he seems OK with that, he's just hanging around the pen & lunging at Paladin if he gets close. Pepper is still in with the girls, he was a little slow this morning. I'll have to go check on him, & see if he is ready to go out. He's been a little pokey the last few days. He's eating real good for him, but just seems to be a little off. Hope he's OK, at his age of 35+ he doesn't need any problems.

Hi !.
You re, I guess , probably very interested to know how one can reach 2000 per day of income .
There is no initial capital needed You may start to get income with as small sum of money as 20-100 dollars.

AimTrust is what you thought of all the time
The firm incorporates an offshore structure with advanced asset management technologies in production and delivery of pipes for oil and gas.

It is based in Panama with affiliates around the world.
Do you want to become an affluent person?
That`s your choice That`s what you desire!

I feel good, I started to take up real money with the help of this company,
and I invite you to do the same. If it gets down to choose a proper companion who uses your funds in a right way - that`s the AimTrust!.
I take now up to 2G every day, and what I started with was a funny sum of 500 bucks!
It`s easy to join , just click this link http://etomyxohi.100megsfree5.com/samojoxy.html
and go! Let`s take our chance together to become rich