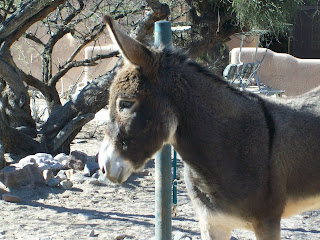 John is still hauling skunks on a regular basis, one every morning. I have no idea how many he's hauled, nor do we know how many are probably repeat customers. Quite a few neighbors say they are having problems too, so I guess we just have a lot of skunks this year. I am really surprised John hasn't gotten sprayed although he did have one "poot" a little. It took almost a week & scrubbing with different potions to get the smell out of the bronco. Although he's pretty careful to keep the live trap covered with a blanket, they like to chew holes in the blanket if they can. John says when he can see their eyes thru the holes in the blanket, he knows they can see him, & it's time for a new blanket.

The last couple of days Paladin has been allowed out with the girls & we have been keeping an eye on him. He's been pretty good, although if we hear running, grunting, or anything else that sounds like trouble, we go see what's happening. All day yesterday we reacted & they always looked at us like we were nuts. Today we were gone all day & when we got home we saw dust flying. Paladin was chasing Daisy & Frijolita around & around, thru the pens & in general acting like a prepubescent brat. John yelled at him, which got his attention for about 5 seconds, after which it was great fun to really speed up to catch the girls again.

John dragged out the equalizer...........the bb gun. We hadn't tried it yet, although we had threatened him a time or two verbally. John ran out in front of him one time, shook the bb gun at him, & Paladin slammed on the brakes turned left & promptly ran into one of the upright posts on the feed room. He doesn't pay attention to where he's running a lot of the time. About this time, Daisy doubles back to run in front of him, so he could chase her again. Here we are trying to save her & she's egging him on............!!!! He's 2 1/2 & she's 23 or more, so we've been calling her "Cougar" Daisy, the older woman, younger man thing. When he took off after her, John popped his butt with the bb gun. He tucked his tail & kept running. John popped him again & the 3rd time he finally decided to stop & figure out what was going on, which gave me a chance to put Daisy in a pen. Frijolita had taken an opportunity to disappear, she really doesn't like him at all. But Daisy seems to, & she likes to run with Frijolita. I would imagine all Frijolita was trying to do was get away from both of them.

Hanna seems to be having fun running with the herd. She's usually close to Tula, but if John shows up she will follow him anywhere. We still haven't started working with her, although she does have something that will have to be corrected. If you are standing with a group of donkeys, & not paying attention to her, she will nudge you with her nose, & it isn't always gentle. Actually she will do it if you stop petting her too. It's cute...............but probably shouldn't be allowed. So starting tomorrow we will being discouraging such behavior. She's a smart girl, it probably won't take but a few times for her to figure out we don't want her doing that.