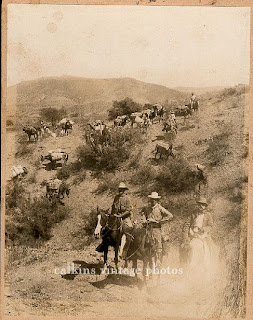 The temperature in Benson today was 101* at about 1pm, when we drove by the Chamber of Commerce. I'm sure before the day was over it was a couple of degrees warmer. I don't mind the heat, BUT, I really dislike the humidity this time of year, especially if we don't get the payoff of some rain. We got a few drops today, what we call a 2 foot rain, about 2 feet between drops.

This morning Georgette came out to visit with Sha'ba. She came out on a tour about 3 years ago, & Sha'ba touched her heart & she has stayed in contact ever since. She brought him a new fly mask, guess the last time she was here, the mask he was wearing looked pretty ratty. She brushed him & loved on him, & I think he really enjoyed it. At least he didn't butt her like a billy goat, which is what he usually does to me.

This afternoon we went into Benson to my Mother's place. Years ago John put a 250 gallon stock tank in the ground for Mother to use as a fish pond. She got some little goldfish from a friend, dumped them in & over the years they have grown into foot long beautiful fish some with veil tails, really pretty. Earlier this month her electricity went off during the night & by the time she got in touch with us & John drove in 7 of her larger fish died. They needed more oxygen than the water was carrying I guess without the pumps running. So Mother decided she wanted to get rid of the rest of them. One of her neighbors has some friends in Tucson that have an 1,100 gallon pond in their back yard. So we went in to help catch the fish. Boy was that fun, even though we had 2 large nets, the water was murky from us stirring it up, & they were very quick. I finally took off my shoes & climbed in. First thing I figured out was the bottom was extremely slimy. So slimy that I couldn't move my feet without danger of sliding around on my keister. The man would say "there is one behind you"..............right......there was no way I could turn around & catch one. Mother had said she thought there was 11. We caught 15, which made for a pretty full ice chest. They had a pump to pump air into the water & also put ice in the water. They brought fish from Kansas when they moved out here years ago, with the same setup & said they got along just fine. I'm glad someone got them that will enjoy them.

When we came home from the fishing trip, the first thing we noticed when we drove in, was Daisy under the big mesquite & Frijolita over by Max's pen. Hmmmmm.......!!! Neither of these areas are near the pen we left them in let alone IN that pen...........!!!! The gate was wide open & we have no idea how it got that way. I've never seen either of them messing with the gate, so I assume it got left unlatched this morning & they figured it out. It was only about an hour till feeding time, so we let them enjoy their freedom till roundup time. John came in the feed room & said he needed my help, they weren't interested in going in the pen. Surprise, Surprise......!!!! (G) I went out to Frijolita, pointed & said GIT.....!!!! She took off towards the pen, tried to detour, I yelled at her, & she took off at a trot right in the pen. John said he had her at the gate 3 times & she took off. Like I told him, she doesn't recognize him as the boss, he's just the hired help...........!!! I got a dirty look for that observation.........!!! Daisy wasn't interested in going on her own, she was too busy sniffing out mesquite beans. I got a little rebellion when I put the halter on her, but she finally decided the jig was up, & followed along to the pen like a little lady.

Tonight when we fed, Cisco choked. We've had a lot of trouble with choke this year for some reason. I've about decided to not feed pellets anymore. The vet told us every choke she has ever cleared has been on pellets. I will try soaking them into a mush & feeding them that way, rather than adding dry pellets to the mush, & see how that goes.
Posted by Tish at 8:05 PM