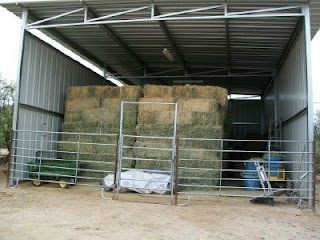 Well, it looks like we're ready to feed for another year. This is a double semi load, like you see going down the highway a lot this time of year & lasts us just about a year or a little longer. We've still got about 15 bales leftover, that the guys will have to eat before they start on the new stuff. I wasn't here when they got thru unloading, but John said when he let the donkeys out of their pens, they headed straight for the hay barn to see what had happened, & probably to see if there was anyway for them to participate. By that time John had the panels back up, much to their disgust.

Right now the mesquite beans are still green, although they are starting to ripen. Everyone is eating the green ones they can reach, right now which I'm not really worried about. When they ripen the sugar will be a lot higher, & some of the ones that are more inclined to foundering because of insulin resistance, will have to stay in pens. We will also shut off Burroland, & open it up so the range cattle can go in & eat the beans over there. A few of them like Pepper & Buddy will have to stay in the pens, because there is plenty of beans even with Burroland unaccessible. We watch the poo & if someone starts having more beans than hay in their poo, they'll have to be penned. Unfortunately Pepper really needs to move around as much as possible because of his arthritis & whatever is wrong with his hip. We'll just have to deal with it when the time comes, because he can't have another bout of laminitis, i.e. founder.

Courtney got out to trim Monday. We had quite a list this time, including her 3 little minis. They hadn't been trimmed since they came quite awhile ago, & were starting to get a little long. She said they would probably chip off if we get some rain, but went ahead & ruined their day. They very rarely have to do anything they don't want to do, & that is usually only herding, NOT, putting on a halter & lead rope, & having to stand still. They actually did good after getting the halter on, that was the hard part......!!! (G)
Posted by Tish at 9:13 AM

oh those beans... i'm having to watch at my place too! luckily most of my pens are NOT near the mequite, but a couple are. might have to move those kids! however the others love it when i throw them a handful now and then :)

Our property is covered with mesquite. In fact they can reach limbs from inside the pens, although over the years they are getting short enough to be hard to reach.