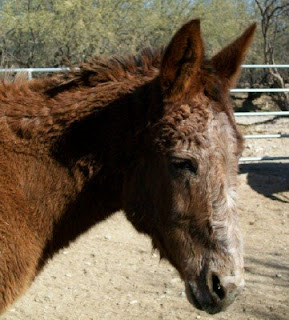 Not a real great picture, but she wasn't interested in interacting with the silly woman with the camera this morning. Besides Max the horse for some reason was running all around her pen making ugly faces & lunging at the pen. WHAT IS HIS PROBLEM? As far as I know he has never paid much attention to anyone we've brought in. I told him she's a girl & he should be more of a gentleman, but he continued to act stupid. A couple of times I thought he was going to fall down, since his hindquarters don't always go where he wants them to & he was so busy being, "big tough guy". She just looked at him like he was an idiot, & kicked at him a few times. We'll keep her in the pens for a few days until she gets use to the place, & "big tough guy" wears out or gets bored with the game. I think she's already bored with his antics.....!!! Guys never know when to quit do they? (G)

She seems to be a sweet girl, & is walking much better than I was expecting. But her Glucose/Insulin ratio is off the chart, so she is without question insulin resistant. Patti, is a whiz with nutrition. She has helped dozens of owners, balance their horses diets & brought the horses back to being useful, after bouts with IR, & laminitis. She has offered to help balance a diet for Judy. Well actually she was nice enough to help, when I asked.

Judy will be getting soaked hay tonight. Hopefully she won't think we have lost our minds, & will eat it.