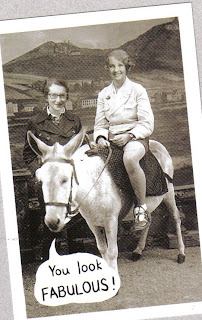 We took Judy to the vet today to have blood drawn to test her for Cushings. She goes in the trailer just fine, but "walks" for the whole trip. And she is heavy enough that you can feel her back there moving back & forth. She was a good girl for her blood draw. We should have the results back in a few days & everyone that has seen her agrees that she looks like a Cushings type of gal. So we'll start her on pergolide as soon as we get the results & have some idea of how much to give her every day.

Came home & there was a rather large box sitting just outside the gate. We always ask that anything we order be delivered to my Mother's house in town. The UPS driver's try to open the gate, drive in, deliver & drive out, before closing the gate. I realize they are in a hurry, but if the donkeys got out, it might make for a fun afternoon for us & the UPS driver.........!!!! (G) I had ordered an insulated waterer for Sha'ba's pen. Unfortunately when we set up the pens, we put the oldest skinniest little guy in the coldest pen & his water will freeze first & hardest on a cold night. I guess the company didn't notice a different delivery address than the billing address.

The box was sitting outside the gate, but of course once it was discovered & deemed something worth investigating it didn't matter which side of the gate it was on, the donkeys could reach it, mouth it, grab the cardboard & rip off big pieces & throw it everywhere. The insulation for the waterer is foam, luckily they didn't have time to delve deeper into their project, so it was still intact.

This is the 2nd time recently they've found a package to play with. The other one was a box of home grown Pennsylvania potatoes from some dear friends . Thank goodness the donkeys weren't interested in the potatoes, but there was no box left & they had strung potatoes EVERYWHERE. I don't know what the facination for cardboard boxes is, probably the thought that it isn't suppose to be there. They are always in John's assorted piles of "treasures" up by the garage. If he adds one little item to a pile by the next day it will be moved or dragged far enough away, he has to look for it. They remind me of cats, when it comes to noticing something new or different.
Posted by Tish at 5:22 PM