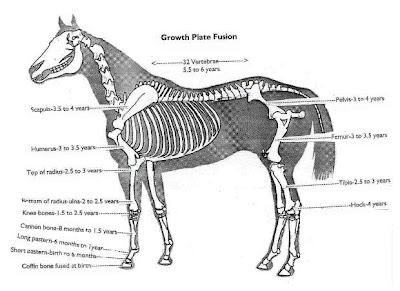 Wish I knew where I got this drawing, so I could give credit....!!!

This is amazing when you think about it. This drawing shows when a horse's skeletal system is through growing. Think about how many are "started", at the age of 2. Think of how many older horses you see that are sway backed or have joint problems. Gee, I wonder if starting them at the age of 2 might have something to do with health problems in later life.

Standard donkeys mature slower than horses & mammoth donkeys mature a year or more later than standards about age 6 or 7. Our Jenny who is a mammoth, came here at the age of 9. She had already had 2 babies, one lived, one didn't. She came here with chronic infection of both front feet & had been that way for a year, which would put her back to age 8. They carry a foal for about a year, so she was pregnant for 2 years of her life. If you do the math, she was only a baby herself, when someone bred her. Tula also had a baby young, but she wasn't bred per se, she was running with a herd & was around 2 or 3 when she had Paloma, as far as we can tell. In a perfect world the jacks will not breed the younger jennies the alpha jenny won't allow it in a natural herd. But as man interferes with the natural progression of their lives, such as BLM capturing herds or part of herds, or owners not having jacks gelded & leaving them in with momma or other jennies, the jacks are determined to pass on their genes.

John is still dipping ice out of the buckets every morning. He got the new heated water tank set up & it seems to be a big hit with everyone.

Boy, Lucy doesn't like Judy at all. Yesterday afternoon as they were gathering to go in their pens, Judy walked in Lucy's general direction, & Lucy took off running. Believe me, Lucy does not run unless she thinks it's absolutely necessary. I haven't seen Judy do anything except pin her ears as she walks, which is normal behavior. But Lucy seems to have decided they aren't going to be best friends. Unless Judy is being mean when I'm not looking. She doesn't strike me as that type, she's very mellow. Besides if she was going to be mean, she wouldn't care if I was watching or not...........!!!!

Chester is still enjoying his morning massage. Wish I knew what I'm doing. But when he likes it, his lower lip twitches, & this morning he was leaning on me with his lip twitching. I can only assume that I had found "the spot". I don't know if it will help him walk better or not. Some days he walks with very little limp. Other days it's very pronounced. For awhile I was afraid the infection was coming back. But he hasn't had any antibiotics for weeks, & I would think if there was infection still in his elbow area, it would be showing up by now. So I think he might overdue it or maybe step wrong sometimes & make it sore.
Posted by Tish at 11:47 AM