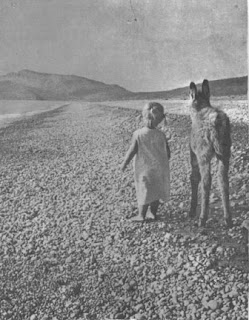 THE GOOD NEWS: This morning while Max was waiting for breakfast to be served he got a little impatient & started prancing & air dancing. This from a horse that less than a month ago, I was thinking about his final resting place because he didn't know what his back legs were doing. I guess the 2 supplements the vet had me try are working. I'm sure he has extensive arthritis where his neck was broke, & as he gets older it will be more problematic. But as long as we can keep him comfortable, we're happy.

THE BAD NEWS: Also this morning Gus came in close to 3 legged lame, pointing a front foot & not moving unless he had to. I checked him from shoulder to bottom of foot, & only got minor reaction at the knee. But he really doesn't want to put any weight on it. He did manage to clamber up on the feed room porch to beg for anything I might like to give him. But when it came time to get off the porch, it was very painful to watch him move. I gave him a bute & turned him loose. Courtney that does my trimming, says unless there is a really good reason to keep them penned up when they have a problem, they are usually better off being able to move around. Haven't seen him since, he's moved away from the house, so I assume he's doing OK.

THE GOOD NEWS: Pepper ate all his soaked beet pulp & pellets, & also ate all of his hay. I can only assume there is very little left to eat on the property. He really prefers "wild" food. John's going to check BurroLand this week to see if the mesquite beans are rotted enough, so they won't eat them. If so, they can start going over there.

THE BAD NEWS: Buddy Brat is now being fed by himself for weight control. He's been here almost 8 years, & is a fat little guy. I've never been able to get the weight off him. His latest blood test showed he is insulin compromised, which can be "fixed" with diet, & a lack of sugar & starch rather than thyroid medicine. We've never completely isolated him at feeding time before. I'm hoping by feeding him a little less hay than he should have for his recommended weight, that he won't be able to find too much out there to supplement his diet. It certainly doesn't take him long to finish the paltry amount of hay we are giving him, & then he cries to get out with BlackJack & Cisco, his usual eating buddies. If this doesn't work, he will have to stay in the pens, relying solely on the hay we give him. That would certainly up the ante on crying & braying, I'm sure. He's always been very vocal if he thinks we are not letting them out of the pens in a timely manner.

I love that picture that headlines this post. That is just perfect! Makes me ask all kinds of questions. Where did it come from? Where was it taken? Whose child is that? Was that a pet or a stray burro?
Sigh. Gorgeous pic.

The picture was posted on one of the groups I belong to & the woman asked the same questions you asked. She has no history for it & was hoping someone else might. It's such a wonderful picture I thought I would pass it on & who knows, maybe someone somewhere will recognize it.