This afternoon we brought Rusty home. He wanted to play games, didn't want a halter on, didn't want us to catch him, didn't want to go in the trailer. I guess we were having to pay for Zeke being unappreciative of his companionship. So rather than fight the battle, we ran him in the trailer, put a halter on him, just because I could & brought him home. Since he was being such a twerp, especially considering how mellow he usually is, I put a stud chain on him to lead him to his pen. Of course he led like a little lamb. It's better to be prepared in these circumstances though. Tonight John will let him out at 10pm with Max & Jack. Maybe that will soothe his bruised ego. I'll know in the morning if they all lay in the wash to sun bathe like they usually do. 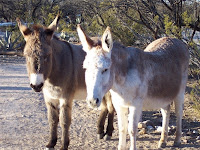 This is Buster & Lucy enjoying the sun this morning while waiting for their breakfast to be served. They know where the sun is the warmest, & I even caught Shiloh standing between one of the metal hay bunks & the sun, letting the sun radiate off the metal side & warm him quicker.

I called to check on Fred the pig last night. He had "corrective" surgery Monday. Donna said the surgery was uneventful & he is doing just fine. She also said her dominate female, Marilyn has a crush on him. She goes around nuzzling him & leaning on him. I hope his surgery doesn't put a cramp in his style..............!!!! (G) He still won't sleep in the barn with all the other animals, he's taken over a small house that's out in the pen. The 3 sheep have checked the barn out & went in when it rained one day, but they aren't all that interested in shelter either. They had a small shed before, but they must have not used it much.

Everyone else seems to be doing good. Sha'ba & Pepper are still wearing their boots & blankets every night. It was 20 degrees this morning & as thin as Pepper is, I doubt if he could keep his body temperature up without a blanket. I've tried feeding him more food, but he will only eat so much.