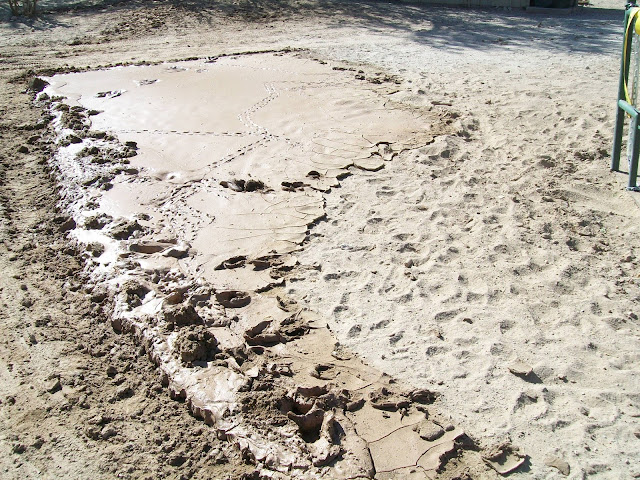 At least to some of them.  This is how it looked yesterday morning when we went out.  It was easy to see who the culprits were, just look at their feet.  They had "mud" boots on, it's really really sticky stuff.   Rosie and Cheyenne both had muddy feet.  The other little trail we think is a Colorado River Toad, coming out at night to enjoy the mud.  We haven't seen him, he's gone by the time we go out in the morning.

This morning more of them had been in it.  I would imagine it was the ones that only had mud on their muzzles yesterday.......!!!  LOL  Shaggy Bill and Don Juan are the only ones I've seen so far.  Those two and Smoky Joe are about the nosiest donkeys I've ever seen, and almost all donkeys are pretty nosy.  I don't know what the interest is, just something different I guess.

The drilling isn't going much better, the clay is still gumming up their bit, so until they get thru the clay it's going to be a challenge.  The old well is turned off, so all the water we have is in the 2000 gallon holding tank and it's going down day by day.  So we'll probably have to buy another truck load of water since they are having problems.

BUT..........this might be a good thing.  A few weeks ago we were talking to a friend that has connections and he was telling us about a plan he and some of his connected friends had for the dirt track, if Wildcat fell thru.  The word Motorplex in the name sounds like what he was talking about, so I have my fingers crossed, that might be what's happening.