Well it looks like the mammoths, all six of them are going to the same place.  A local man that has been around donkeys & mules all his life, is willing to train them & find good homes for them.  He has a wonderful set-up, arena, round pen & pens to separate them.  All in all I don't think we could have found a better solution for them.  With some training they will be much more adoptable & will have a better opportunity to go into a good home & stay there.  Thank  you Tom, for being willing to get involved.  We'll help move them next week, hopefully that will go smoothly.
I guess summer is here & fly season is in full swing, although we are still getting cool nights.  Sha'ba & I are fighting the battle of the habronema, he has 2 pockets of the little monsters on his sheath.  I find as many as I can twice a day, dig them out,  & cover the area with ivermectin to kill the rest of them if possible.  Once they get started we have to deal with it until next winter.  Poor little guy, although he doesn't seem to mind all this attention, it has to be sore.
Gus is still doing good with his feet.  He seems to have recuperated from the trim last week, & is back to moving around at will.  I've thought about taking the boots off & see how he does, I'm still thinking, don't want to set him back if I can help it.


Everyone else seems to be doing good.  Of course everyone is wearing fly masks now, I'm having to put sunscreen on Quilla & Gus' front legs where there is no hair.  There was an interesting article in Equus magazine last month about skin problems caused by sun sensitivity.  It wasn't exactly like what the boys have, but close enough to make me read it a couple of times & try to digest what I was reading.  They have both been overweight, & when Quilla was snake bit last fall they did a sonogram on his liver & said it was enlarged & not shaped right, possibly from fatty liver disease.  The liver seems to be involved in photosensitivity if a couple of the enzymes are tested & elevated.  One of the causes can be from eating certain plants that cause a buildup of chlorophyll in their system that overloads the liver.  If the liver can't metabolize it 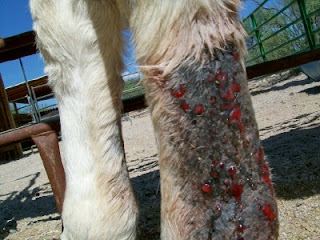 From 2009, when Quilla came here, hasn't been this bad since, thank goodness...!!!
quickly enough & the chlorophyll ends up in the blood stream they can get sensitive to the sun.  The skin breaks open & bleeds which of course attracts flies & it's a vicious circle.  Alfalfa hay seems to be one of the plants than can cause it.  We don't feed alfalfa, but I know Quilla was fed alfalfa for years.  Gus has only eaten grass hay for the last few years, but we don't know what he ate before then.  Unfortunately if the plants aren't removed from their diet when the problem first starts, they will be sensitive for life.
Posted by Tish at 6:02 AM

Ouch! Not sure what you've got there, but it doesn't look like Photosensitivity - we have a gelding with it. The photosensitivity will only affect the white/pink skin and there is usually very little swelling.
Good luck with him! I hope all goes well!!

If you cover it up for 24 hours it almost disappears. And the vets haven't been able to come up with any ideas. I know generally sensitivity only attacks white/pink skin, but what else could it be? The skin where the hair follicles are destroyed, is very thin & dry year round. If you touch it, it bleeds. Of course once the flies get started on it, it really gets messy. Both Quilla & Gus have it in the exact same place on their legs. Quilla also has places on both hind legs about the size of a half dollar that I've been able to keep from growing, by keeping them covered with thuja zinc oxide. I'm certainly open to any ideas......!!!