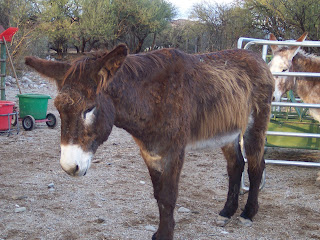 We're busy getting ready for the open house tomorrow. John attempted to put out some of the signs this afternoon. I looked out the window & saw something pink across the driveway, flopping up & down like a flag. I couldn't see what was making it move, so I decided to go out & check on it. Gus, (the picture above is him thinking about what to do next) had ripped one of the signs off where it was stapled & was trying to eat it. I had to pry the "treat" out of his mouth, before he finally gave up & let me have it. Guess that answers John's question about leaving the signs out overnight, huh? (G)

Tonight everyone will have to stay on the 10 acres, no Burroland. We will have to start feeding early in the morning to get everything done before 10am when the people will start coming. This morning John had to go round them up on Burroland. So since they see nothing wrong with wandering in at their leisure, they'll have to wander on 10 rather than 30 acres. Then dear darling Gus will have to go into a pen. We've decided that he will go in Chester's pen & Chester will go in with Tula. They've eaten together before when we had full pens, so that shouldn't be a problem. Gus is probably going to try to knock the pen down once he's thru eating, hopefully once the people start coming in, he'll be too busy helping to empty their cups of timothy pellets to destroy the pen. I just looked out & he had his head over the courtyard wall, trying to reach a poor little gardenia I've been trying to keep alive. I don't have the greenest thumb in the world, so the deck is stacked against it's long term survival anyway. Fortunately his neck is too short for him to reach it.

Hopefully lots of people will come out to see the donkeys. We think of it as a a chance for education. Many people have not been around donkeys & also a lot of people don't realize the need for rescue & sanctuary. Other people have or have had donkeys, & just want to get a donkey "fix". The kids especially enjoy the minis, & of course the minis love all the attention. So it should be a great week-end.
Posted by Tish at 2:28 PM

I hope your Open House is a resounding success. If I lived a little closer, I'd be right there for a huge donkey fix.

You'd be more than welcome. Did your picture win the other day? You got 10's from me.