GUS HAS A NEW HOME

The last couple of days have been busy around here. At least the weather is getting nicer, today it got up to 71* which was really appreciated by everyone.

Yesterday Martha came to massage Chester & Max the horse. Chester seemed to think it felt pretty good for the most part & seemed to enjoy just about everything she did. I noticed today he wasn't turning his foot backwa 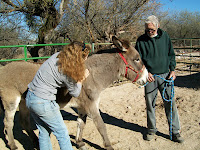 rds as much as he usually does, so maybe a regular routine of massage would help him walk more comfortable. He has a lot of muscle wasting in his shoulder & chest area from non-use that probably won't ever come back. But it doesn't seem to slow him down, he goes everywhere the others do, & moves as fast or faster than they do, & has been known to kick up his heels if I want him to do something he doesn't want to do.

Max was a little less accepting of all this hands on attention. He was quite nervous when she started, but after a few minutes he decided it wasn't too bad & before it was over he was almost leaning on her. She said the muscles in his neck are very tight & he also has some muscle atrophy in his chest. She showed me a few massages I can try to do. I'm sure after having someone 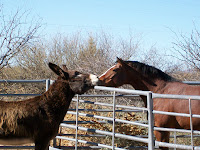 massage that knows what they are doing, they probably won't think much of my attempts, but we'll give it a try. She thinks stretching Chester's leg up & forward would help him a lot, so we'll work on that.

Today after chores we loaded Gus up for his trip to his new home. He went in the trailer by himself after a few minutes & a few ginger snaps, but still sweated up a storm during the trip. They were all ready for him, with his own pen & hay bunk filled with bermuda hay. He came out of the trailer & promptly kicked the dog. It wasn't a "kick him into the next country" kick. It was just enough to thump the dog on the shoulder & make him kiyi for a few seconds . I would imagine given the chance the dog will be more careful next time about wandering around behind Gus. They will probably be good friends, before too long once they get to know each other.

This is he & Leo meeting for the first time. Leo was very excited when he saw Gus, but Gus had to investigate the whole pen & eat a little hay before he deemed it necessary to introduce himself. By that time Leo had paced back & forth many many times, trying to get Gus' attention. When we left, Gus was in the run in shed dining on hay. They keep hay out all the time. Gus isn't a pig about food like some of the donkeys are, so I think he will do OK, with having food available all the time. Leo is definately lacking in the ear department, isn't he.............????? (G)

This is a link to a wonderful story of people getting involved to make a difference:

We had been joking all day, that since we were taking a donkey to a new home there would probably be a message when we got home about donkeys needing a home. It's happened before. Would you believe there was a message about 2 donkeys a 2 goats that showed up on Colossal Cave Park on our phone when we came in? Right now I don't have anyone wanting donkeys & even with Gus gone, we really aren't in a position to take in two more. John is going to make a call in the morning to the ranch where he does jeep tours in Tucson, to see if they might take them. They have a old donkey named Louie, roaming around with the horses. Maybe they wouldn't mind a couple more. Louie might mind, he likes to mug the tour jeeps when he sees them. Most of the drivers carry treats, so Louie & the horses have learned when they see the jeeps it's "showtime"......!!!!!!