Gus seems to be back to his old obnoxious self. I wouldn't think 2 days of Tucoprim would make a difference, but who knows. He'll get it for 2 weeks unless he gets so pushy in the meantime we can't stand him......!!! (G) 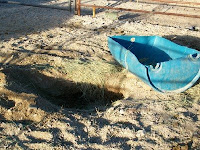 y, every day? He's done it for years, but lately has really been going for some sort of a record I guess. I keep telling him if I fall in one of these caverns & break a leg, or hurt my back using a shovel, I won't be able to mix his special feed & give him extra treats. 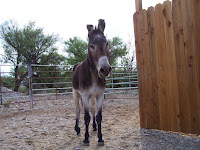 Needless to say, he keeps his hooves nice & short. We've tried feeding him in a bunk hanging on the corral panels, he does the same thing. He has a hard time raising his neck because of arthritis, so we thought on the ground would take care of the problem. Obviously not.

Courtney is coming out today to trim. She should only have to do a little touch-up, everyone seems to be wearing their feet even, except for Chester. He's hard to trim because he can't stand on his bad leg. But Courtney has his feet much better than they were. Right now his hoof on the bad leg is too upright, & the frog isn't touching the ground because it has atrophied from non use. Now that he is using it more we hope the frog will regenerate.
Posted by Tish at 8:24 AM

Hi Tish ~
My first thought is mats.
But - does he ever do this away from the feeder? Or is that the only place really soft enough?
Some equids will dig holes so they can point their toes down if their heels or tendons hurt. Which you'd probably already know about but just a thought.

He's got a broken fetlock in the rear but he digs with the fronts. I've watched him, he can sling that sand way up in the air. He will dig where the feeder isn't, but it's in an area where the feeder has been, if that makes sense. His whole pen is soft wash sand & gravel. I can imagine the sad look he would give me if I put down mats so he couldn't dig.........!!! (G) It doesn't hurt anything except when the feeder is in his shelter, which he shares with Rusty. He slings it into Rusty's feeding area. So unless the weather is bad, we feed him outside, like the picture.

How you doing, haven't heard from you in awhile.