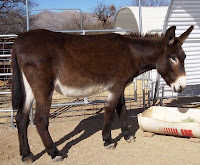 I haven't said much about Jenny & how she is doing since we saw her trot a couple of times. She doesn't run around trotting all over the place, but she does move easily & doesn't seem to have any pain in her feet at all. Below are a couple of pictures of her front feet, & although they look horrible, they seem to do what they are intended to do. 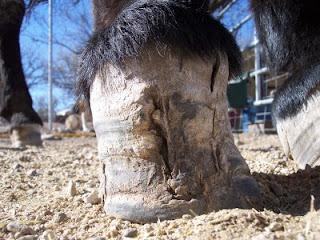 This is her right front, which has always looked the worse. She had a lot of infection in this hoof & it is the one that had proud flesh & maggots this summer. In the picture it looks like there might be a couple of pebbles caught in the vertical crack. I went out with a hoof pick this morning after I saw the picture. As far as I can tell there isn't an equine on the property.............!!!! I guess they are over on Burroland, but it's unusual that we can't find at least one or two...........!!!! 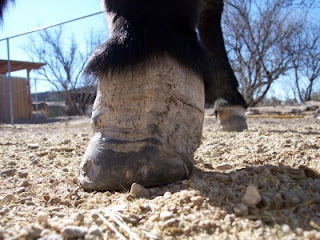 The left one has always been the one that seemed to bother her the most. As far as I can tell, it never had any openings to the outside like the right one did. In fact I can still get hydrogen peroxide to bubble, if I spray it on on the right foot.

I also called Lynda this morning to see how Chili & Gus are getting along. She said they are doing great, they hang out together & even do some rearing & play fighting. She said Gus has put on a little weight & REALLY loves his treats..........!!! Hmmmmm.............. hope he's not getting TOO many treats. After being by himself on a ranch for years & being thought of as a nuisance, it sounds like he's really having a good time, which is what we like to hear.

I'll wait a few days to check up on Molly Brown to see how she is settling in to her new home. Things are kinda slow around here today it seems, without her nosy little self running around keeping everyone "entertained".
Posted by Tish at 11:31 AM