Yesterday was vaccination day for everyone except, Tula & Jack the mule. Tula probably wouldn't want to do training after I had stabbed her with a needle, so I decided to wait on vaccinating her until later.

The last time we tried to vaccinate Jack, I decided then that we would never vaccinate him again. I think the only way you could safely vaccinate him, would be to use a chute. To say he is uncooperative, is definately an understatement.

Everyone did good, except for little Justin. You would have thought we were trying to throw acid on him. And that was while we were trying to catch him. He saw us catch Cheyenne & Lynn, & decided we weren't catching him. Finally John threw a rope around his neck, we 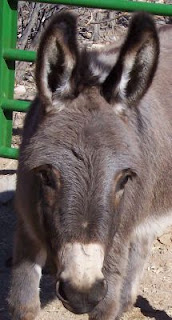 thought he would quit when he knew the game was over. NOT SO....!!! He ran, bucked, snorted, tried to choke himself by straining against the rope. John had to be careful to keep it loose enough, so the silly little boy didn't choke or hurt himself. I finally dove into the fray, & managed to get a halter on him. Even then he wasn't willing to give up, but at least with a halter it was safer for him. He's only about 33 inches tall, weighs probably less than 250 pounds & pound for pound is extremely strong. Sure sent John & I running & flying around the pen. Thank goodness there was a post in the middle to dally to. He got his shot, & then got to stand tied to the post till he relaxed & quit acting silly.

Once I let him loose, he wouldn't have anything to do with us the rest of the day, wouldn't even take a carrot from John. This morning he's back to his usual loveable little self. I hope his Momma comes & takes him home before it's time to vaccinate again.........!!!!!

Yesterday some people that want to be Sugar's new family came to visit. They have a 10 year old donkey that is lonely. They did have 2 horses they had rescued, but they went to new homes, so Jack is by himself. We will do a home study probably in the next week or two, & if everything is OK, Sugar will have a new home. We will probably let her out of her pen tomorrow, so she can meet everyone. I'm sure she will run & buck like crazy when she goes out, they all do. She was trying to run & buck in her pen this morning, but there wasn't enough room for her to get up to speed.