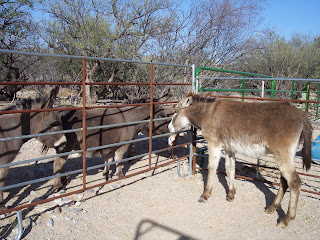 She isn't much bigger than the minis...!
After being around "Tootsie", grooming on her & having her all but try to climb in my lap, I have decided she isn't really a Tootsie. She is as sweet as she can be, so I thought the name Brown Sugar, (Sugar for short) would be apropos. Her feet need to be trimmed, so this morning when I was brushing her, I asked her to give me her feet. She wasn't really sure what was going on, but she willingly picked them up. I'll work with her for a few days, before we try to trim her. As young as she is, & as long as her feet are, I doubt if she has ever had them trimmed.
She still has her baby fur, so it's hard to tell what color she is. She isn't really spotted, but seems to be at least 2 different colors of brown, with a pretty white blaze on her face.

I'm still working with Tula every day too. I think Sugar will make much faster progress, she hasn't been messed up by her time spent with humans like Tula has. Tula is actually doing really good, but isn't in a big hurry to give up being cautious.
Posted by Tish at 12:06 PM