I sometimes wonder about humanity and the way they are headed.  Man has never always been a good steward of the earth and it's creatures and resources.  Many people seem to think anything and everything is here for their entertainment or use.  It costs nothing to be compassionate, and caring, yet everyday we hear about incidents that show just the opposite.

One of my wishes has always been, that someday there would be no need for rescue and sanctuary for animals.  Articles like the one above make it very difficult to think that will ever happen.

Pictures like below offer hope for the human race.  Thanks Brian Wanke for the pictures of these girls having a wonderful time with some of the donkeys in Colorado.  You can't help but smile to see how much fun the girls and the donkeys are having. 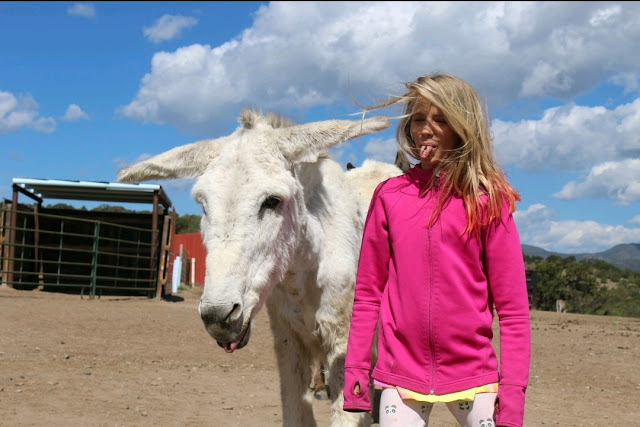 I think this is the best picture of Quilla sharing his tongue expertise with Rosie.  I haven't met these girls, but hopefully I will some day. 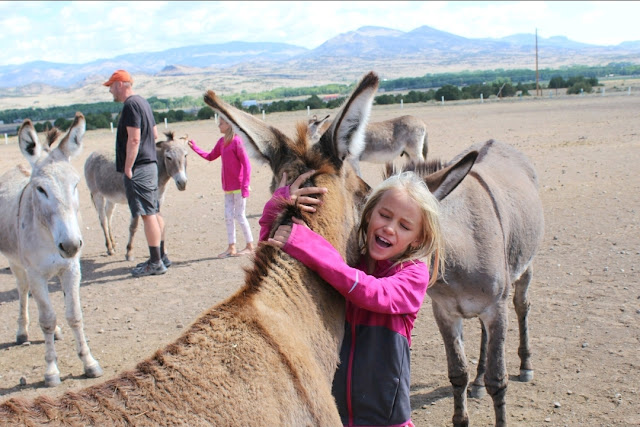 Donkey Trudee with new friend Lily.  Looks like some of the others are waiting their turn 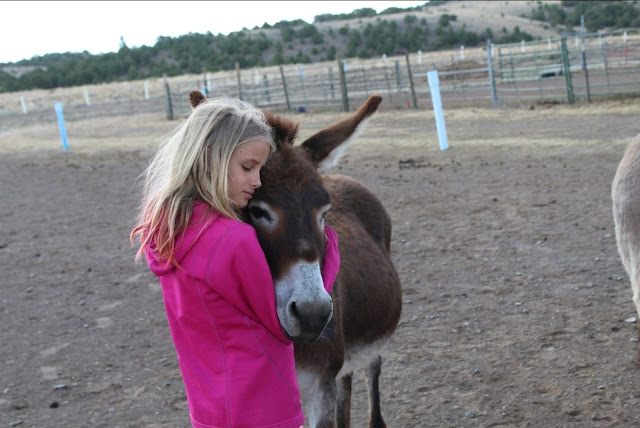 Rosie I think, with Boaz 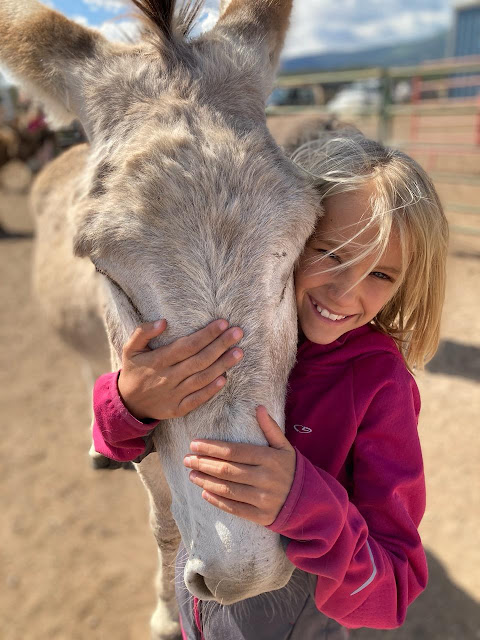 
I wish all donkeys in the world could be appreciated and be with people that value them for the amazing animals they are.  I also wish all young boys and girls would be raised to value life.  I've always heard that a society is judged by how they treat their old people, children and animals.  I'm afraid at this time in history, much of society needs a lot of work in all 3 areas.

Sasha, the new little girl with the bad feet, was out all day yesterday.  When it came time for afternoon roundup she was no where to be found.  That usually means the new ones have found Burroland, and either got lost or are having too much fun over there to come back and get stuck in their pen, even if it is time to eat.

John took off in the golf cart and didn't find her.  We went ahead and fed and I took off in the golf cart.  Chances are if one is missing they won't be close to the trails.  I actually went around the trails almost twice before I saw her laying down, in the farthest NE corner of Burroland.  What that means is she was in the farthest corner from where she needed to be.............SIGH....!  I tried to get her up but she wasn't interested.  Because of her feet I didn't know if she couldn't get up after walking all that way, or if she just didn't see any reason to get up.

Got in the cart and went back to get John.  Got a halter and a couple of leads and started thinking about what plan "C" might be.

When we got back, she was up and heading into the brush.  Guess that answered my question, she could get up and was trying to hide......LOL  She let me put the halter on her, put the lead on and she planted her feet.  (It's going to be a long walk back to the pen area)  John tugged and I encouraged from the rear.  She wasn't the least bit interested, until I used the extra lead as a butt strap.  Then she took off after John like it was her idea.  She did think she had a better idea of the best trail to take,  so she'd balk if John went the wrong way. But she actually followed pretty good.

DJ the pony got his teeth looked at yesterday.  Well, what teeth he has, he's 27 years old, and his teeth are are worn off to the gum line in the back.  One side has a little bit of tooth left, but the other side is completely worn out.  He has pretty good front teeth that were wavy, so Dr. Debra straightened them out.  Wasn't much she could do for the back teeth.  We've upped his pellets and John is shredding his hay and he's eating it much better now.  Hopefully we can get some weight on him.  He's a cute little guy and actually was a good boy for her to work on, once he decided she wasn't going to hurt him.  I think we have a home for him, but we'll keep him until he gets some weight to cover his bones. 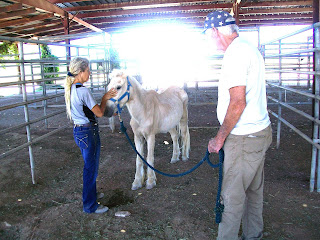 I'm suppose to race on the asphalt tomorrow night.  That will only be the 2nd race so far this season.  The Cavalier isn't ready, so I'l be racing the poor little Neon that's been wrecked more than once.... !!!
Hopefully it will be a good night.  The county is talking about requiring masks for anyone outside their home.  If they do my racing season may be over, this time of year it's miserable enough sitting in the car in staging waiting for the race ahead of you to be over with all the safety gear on. Don't think I want to add a face mask to the mix.
Posted by Tish at 11:10 AM

I also saw that article about that poor donkey. Couldn't even finish reading it. Like you, I'm disgusted with the human race.
Is it the parents? The social climate? I don't understand it. Really upsets me. Loved all the pictures in this post and of course I have a special place in my heart for Quilla.

I think it is a combination of things. I've always said nothing will change until we have a depression like in the 30s. Those people didn't have time to worry about what was right or wrong, they had daily problems to take care of and had to make the bsst of what they had. They didn't "sweat the small stuff". Those kids learned how to work at an early age, 5 year old kids could work a team, if someone harnessed them and did. My daddy was a child of the depression along with his 4 siblings and I wish I had asked more about his growing up. The stories I did hear, sure didn't sound like my raising. And the kids today sure couldn't identify with my childhood. I guess what I'm saying is, our society has done it to ourselves, by raising a bunch of entitled brats and the leaders of today at least a lot of them, were the flower children of the 60s. Hard work never hurt anyone, but too many people today don't value what made our country great. A man that works with his hands and actually produces something is looked down on as not smart, by people that think they are better than he is. If our nation implodes into chaos, the people that think they are in charge will be irrelevant to the survival of the country, they just don't know it yet........!!!